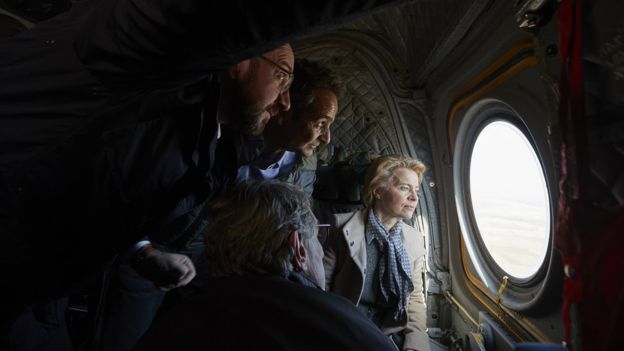 The head of the European Commission has sent a strong message of support to Greece in its attempts to stop migrants crossing its border from Turkey.

"Our first priority is to ensure order is maintained at the Greek external border, which is also a European border," Ursula von der Leyen said.

Turkey lifted controls on migrants exiting for the EU on Friday.

It took the decision after suffering a heavy military loss in north-west Syria, where it has been trying to create a safe area to resettle millions of Syrian refugees it took in during the ongoing civil war.

At least 24,000 people have been stopped from crossing the border from Turkey since Saturday, according to Greek government figures.

Austrian Prime Minister Sebastian Kurz has accused Turkish President Recep Tayyip Erdogan of using the migrants as pawns. He also announced that his government had strengthened Austria's borders to make sure the mass influx of refugees and migrants of 2015 was not repeated.

EU foreign policy chief Josep Borrell is due to visit Ankara to discuss Turkey's decision to drop restrictions on migrants, abandoning a deal struck in 2016.