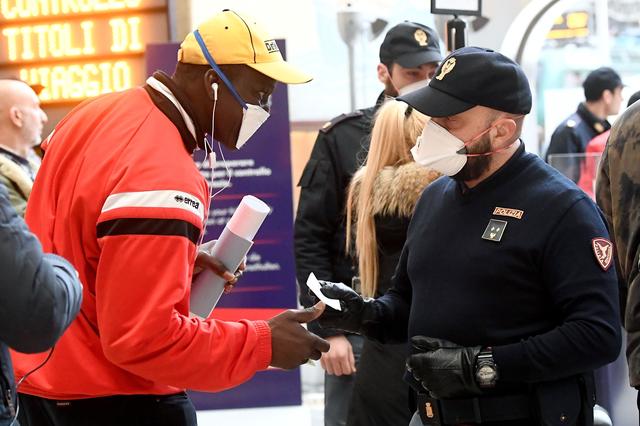 All of Italy under lockdown, reeling financial markets and rioting prisoners made clear on Monday how the global coronavirus epidemic was extending its reach into all aspects of social and economic life.

Major European stock markets dived more than 7%, Japanese indexes fell over 5% and U.S. markets sank over 7% after Saudi Arabia launched an oil price war with Russia that sent investors already spooked by the coronavirus epidemic running for the exits.

In Italy, scene of Europe’s worst outbreak with infections and deaths still soaring, the government took its most drastic steps yet to contain the outbreak, affecting some 60 million people. It ordered everyone across the country not to move around other than for work and emergencies, banned all public gatherings and suspended sporting events, including soccer matches.

Deaths in Milan’s Lombardy region - which had already been on lockdown with cinemas, theaters and museums closed and restaurant hours restricted - jumped 25% in a day to 333, while the national death toll soared by 97 to 463, the highest in the world after China.

Over 9,000 people have become infected in Italy in little over two weeks, out of a global total of more than 113,000 in over 100 countries. Nearly 4,000 people have died across the world, the vast majority in mainland China.

“Now that the virus has a foothold in so many countries, the threat of a pandemic has become very real,” World Health Organization Director-General Tedros Adhanom Ghebreyesus told a news conference.

But he welcomed Italy’s tough measures, noting that just four countries - China, South Korea, Italy and Iran - accounted for 93% of cases worldwide. Israel ordered anyone entering the country to self-quarantine for 14 days on Monday.

“It would be the first pandemic that could be controlled,” Tedros added. “The bottom line is we are not at the mercy of the virus.”

In the United States, which has reported over 600 cases and 26 deaths, the administration scrambled on Monday to assure Americans it was responding to the outbreak as stock markets plunged and top health officials urged some people to avoid cruise ships, air travel and big public gatherings.

U.S. President Donald Trump, who continued to play down the threat posed by the flu-like virus, said he would announce economic measures on Tuesday and would discuss a payroll tax cut with Congress to bolster the economy.

Trump recently spent time with two members of Congress, including one who rode on Air Force One, who are self-quarantining over concerns about exposure to the virus. Vice President Michael Pence said he did not know if Trump had been tested for coronavirus.

Around the world, flights have been canceled, communities and cruise liners isolated, and concerts and trade fairs postponed. While some countries, such as China and Italy, have turned to drastic measures to try to delay the spread of the virus, others remain in a “containment” phase, where individual cases can still be tracked.

Britain, with five deaths from almost 300 confirmed cases, said it would remain in that phase for now, allowing major gatherings and sporting events to continue, while making extensive preparations to move to the “delay phase.”

Funds set aside for a potential sudden rupture in trade ties with Britain, which has left the European Union, were to be diverted to coronavirus mitigation.

Perhaps just as dramatically, Varadkar announced cancellation of all parades planned for the national St. Patrick’s Day festival on March 17, including one in Dublin that draws more than 500,000 people from all over the world.

In Spain, schools were closed across the Madrid region and the Basque capital Vitoria for two weeks as cases topped 1,200 nationwide.

In the Gulf region, where most cases stem from travel from Iran, the emphasis has been on border control. Saudi Arabia said it would fine people who did not disclose health information and travel details at entry up to $133,000.

Iran, with 7,161 cases and 237 deaths, said it was temporarily releasing about 70,000 prisoners because of the coronavirus.

China and South Korea both reported a slowdown in new infections. Mainland China, outside the outbreak center of Hubei province, recorded no new locally transmitted coronavirus cases for the second day.

South Korea reported 165 new cases, bringing the national tally to 7,478, while the death toll rose by one to 51.

With the rate of increase in new infections at its lowest in 11 days, President Moon Jae-in said South Korea could enter the “phase of stability” soon.

In Italy, that phase still seems far off.

Authorities said seven prisoners died as riots spread through more than 25 jails across the country over measures imposed to contain the coronavirus.

Police and fire trucks massed outside the main prison in the northern town of Modena, the site of some of the worst violence.

Barkeepers in Rome and Milan said police had visited them to warn that they risked closure if they let customers huddle together.

“We went into the cafe together but were told to stand far apart. It was really odd because we are friends,” said Ilaria Frezza, a 21-year-old student.

But the bar she was in was, in fact, almost deserted.

“I wish I was having problems keeping people apart, but that’s the least of my worries,” said Franco Giovinazzo, who runs the Spazio Caffe in Rome. “The real problem is there’s no-one here.”