Harvey Weinstein sentenced to 23 years in prison on rape conviction 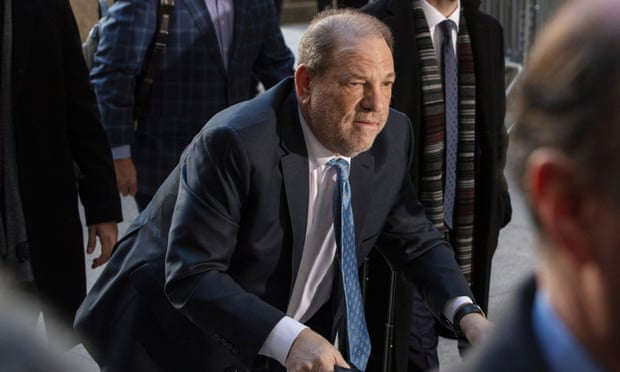 Harvey Weinstein, the titan of Hollywood turned convicted rapist, has been sentenced to 23 years in prison on Wednesday in New York.

The fallen mogul was handed down his punishment by Judge James Burke at the New York supreme court having been convicted of two counts of sexual assault. The judge imposed 20 years for a first-degree criminal sex act for forcing oral sex on a production assistant, Miriam Haley, in 2006.

He also imposed a three-year sentence for third-degree rape of a woman whom the Guardian is not naming because her wishes over identification are not clear.

The two sentences will run consecutively, meaning that Weinstein, 67, will have to complete the terms of the criminal sex act before serving the rape sentence.

Both the main accusers, as well as the four other witnesses from trial – the Sopranos actor Annabella Sciorra, Dawn Dunning, Tarale Wulff and Lauren Young – came into court as a united group, sitting at the front row alongside Cyrus Vance, the district attorney of New York who led the prosecution. The women were cheered as they walked into court.

Weinstein was rolled into the courtroom in a wheelchair. Moments later, Jodi Kantor and Megan Twohey, the New York Times reporters who broke the Weinstein story triggering the #MeToo movement, walked in and sat near the front.

In a victim statement read out in court, Haley said that Weinstein “not only stripped me of my dignity as a human being and as a woman … it diminished my confidence and faith in myself”. She added she felt alone as she was going through the trauma with no idea other women were out there who had similarly suffered abuse.

In her statement, the rape victim said she had finally found her voice. “It is time people who rape other people pay with their life and the life they took.”

Both main accusers asked Burke to impose the maximum sentence.

Lawyers for Weinstein pleaded with the judge for the minimum sentence of five years in prison. Donna Rotunno, his chief defense attorney, cited his work in the film industry as well as his failing health as mitigating factors.

The sex offender also addressed the court personally in a rambling address in which he expressed remorse as well as implying he had been “confused” in his dealings with the women. “I’m totally confused, men are confused about all of this issue.”

Weinstein went on to say: “I really feel remorse for this situation, I feel it deeply in my heart,” adding: “We may have different truths.”

At the end of the proceedings, Weinstein was cuffed to his wheelchair and led away. Several of the accusers who had testified could be seen at that moment sobbing.

Within a few hours of the stunning sentence being delivered, Weinstein was hit with a further withering blow. The district attorney in Los Angeles announced that it has begun extradition proceedings to bring him to face two charges relating to two additional west coast accusers.

The women, one of whom, Lauren Young, testified at the New York trial, allege they were sexually assaulted on two consecutive days in 2013. The charges carry a possible maximum sentence of 28 years in prison.

Since he was convicted, Weinstein has been moving between a secure wing of Bellevue hospital in Manhattan where he underwent heart surgery in which a stent was fitted and the North Infirmary of Rikers Island. His spokesman, Juda Engelmayer, told Page Six that he was miserable but trying to be optimistic, even though he suffered a fall earlier this week.

“He has had a lot of time to think about his life and be humbled, but he thinks it’s going to be a long, uphill battle from here.”

After sentencing, Weinstein will pass into the bowels of the New York state department of corrections. He will be taken to a reception center in Fishkill, New York, for “processing”, and then transported to a prison in upstate New York.

He is likely to experience a rude awakening as he enters the prison system. As part of his reception procedure, he will be required to have a shower and go through delousing treatment.

He will then be made to sit through a suicide prevention video. That part of the proceedings is likely to be closely observed as New York is in a heightened state of tension after the financier and sex offender Jeffrey Epstein killed himself in a federal jail in Manhattan.

Weinstein had also indicated he had suicidal thoughts in documents released on Tuesday from December 2017.

The lengthy prison sentence marks the second major glass ceiling that has been cracked by the Weinstein saga in the legal treatment of sexual assault in the wake of the #MeToo movement.

It was extremely unusual for prosecutors to bring the New York case all the way to trial in the first place – authorities have in the past tended to shy away from accusers who have maintained close and in some cases sexual contact with their attackers as did several of the Weinstein witnesses.

In a statement issued after the sentence was delivered, Vance thanked the judge for “imposing a sentence that puts sexual predators and abusive partners in all segments of society on notice”. He also thanked the women who testified “for their remarkable statements today and indescribable courage over the last two years. Harvey Weinstein deployed nothing less than an army of spies to keep them silent. But they refused to be silent, and they were heard.”

A sentence of 23 years also underlines the new severity with which the legal system now treats such cases. The other instance of a celebrity serial sex offender who avoided accountability over many years – the comic Bill Cosby – was sentenced in 2018 to the much lighter punishment of three to 10 years.