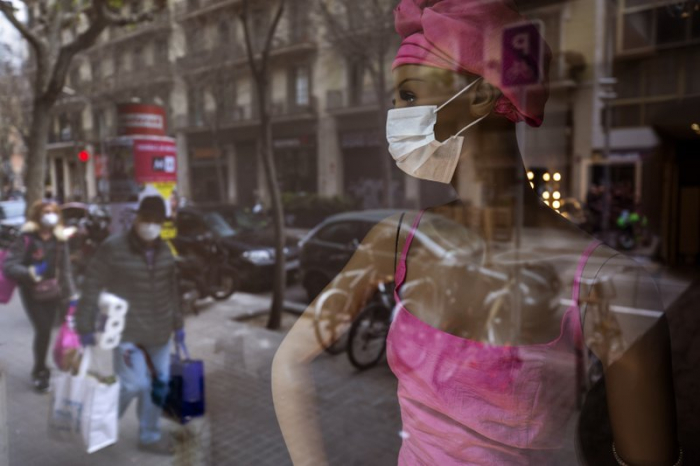 The Spanish government is to put the country under lockdown as part of its state of emergency measures meant to combat coronavirus.

According to a draft decree, Spaniards will be ordered to stay at home except to buy food or drugs, go to the hospital, go to work or other emergencies.

El Mundo reports Spain's interior ministry will control all police forces, including local and regional ones, as part of the state of emergency.

The government said the cabinet meeting that is due to decide on the measures was still ongoing. A news conference is expected around 2pm.

The development came as flights destined for Spain from the UK were forced to turn back mid-air on Saturday due to the health crisis.

Though Jet2 made the announcement it was cancelling all flights before Spain implemented the nationwide measure, the decision was made in light of a sharp rise in infections there and the declaration earlier this week of a state of emergency.

Health authorities in Spain said on Saturday coronavirus infections have reached 5,753 people, half of them in the capital, Madrid. That represents a national increase of over 1,500 in 24 hours.

Prime minister Pedro Sanchez acknowledged on Friday that the number of infections could reach 10,000 in the coming days.

Spain has followed Italy's path in implementing a similar lockdown after both European countries failed to contain the virus in regional hotspots.

Italy extended the strict restriction on movement from the north to the entire country on 9 March when it registered over 9,000 infections. It then went further on 11 March and closed all retail outlets except some supermarkets and pharmacies.

Already in Spain, residents in Madrid and northeast Catalonia awoke Saturday to shuttered bars and restaurants and other non-essential commercial outlets as ordered by regional authorities the day before.

Spain's decision came as other European countries took ever more severe, though widely varying, measures to reduce contact between their citizens and slow the pandemic. China — where the virus first emerged late last year — continued to ease up lockdown measures in its hardest-hit region.

Denmark closed its borders and halted passenger traffic to and from the country, a measure that was due to last through April 13. Travellers were to be turned away at the border if they are unable to show that they have "a legitimate reason" to enter, for example, they are Danish citizens or residents.

Poland was closing its borders starting at midnight and denying all foreigners entry unless they lived in Poland or had personal ties there. Non-citizens allowed in will be quarantined for 14 days. The Czech Republic and Slovakia took similar action.

Russia said its land borders with Norway and Poland will be closed to most foreigners beginning Sunday.

On the other side of the globe, New Zealand announced that all incoming passengers, including New Zealand citizens, will be required to isolate themselves for 14 days, with few exceptions. Philippine officials announced a night curfew in the capital and said millions of people in the densely populated region should only go out of their homes during the daytime for work or urgent errands.

The number of new cases has dwindled in China, but the virus has in recent weeks spread exponentially in the Middle East, Europe and North America, leading Donald Trump to declare a state of emergency for the US on Friday. By Saturday, more than 145,000 infections and over 5,400 deaths had been confirmed worldwide.

Europe has now become the epicentre of the Covid-19 pandemic, with countries imposing a cascade of restrictions in efforts to prevent their health systems collapsing under a load of cases. Schools, bars and shops not selling essential goods are among the facilities being closed in many places.

For most people, the new coronavirus causes only mild or moderate symptoms, such as fever and cough. For some, especially older adults and people with existing health problems, it can cause more severe illness, including pneumonia.

The vast majority of people recover. According to the World Health Organization, people with mild illness recover in about two weeks, while those with more severe illness may take three to six weeks to recover.