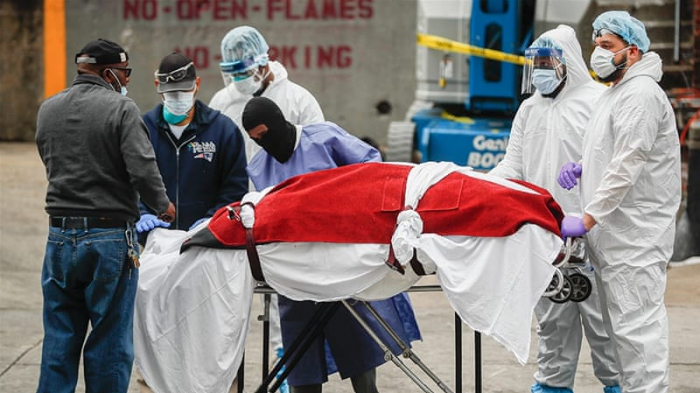 The United States reached 400,000 confirmed coronavirus cases on Wednesday according to the Johns Hopkins University tally, a grim milestone that comes as the death tolls continue to rise in hot spots in what experts expect to be the country's deadliest week so far.

The US set another record with 1,850 deaths in a single day on Tuesday, the highest single-day total of any country. By Wednesday, more than 14,500 deaths had been reported nationwide.

Italy and Spain both still outpace the US in total deaths, with roughly 17,000 and 12,000 respectively.

US health officials have warned that between 100,000 and 200,000 people in the country are likely to die from COVID-19, the disease the virus causes. But officials said this week that despite the grim totals, there are signs that the death toll may not be as high as expected if mitigation efforts continue.

The World Health Organization (WHO) declared the virus a global health emergency on January 30 and a pandemic on March 11.

The US had its first known case of the novel coronavirus in January. By March, US health officials warned of a serious threat to the public.

States began issuing shelter-in-place orders and cancelling classes in an effort to "flatten the curve", or limit the spread of the virus to give hospitals a chance to treat those infected.

The US Congress passed on March 27 a significant $2.2 trillion rescue bill, called the CARES Act to aid prevention efforts and offer a lifeline to struggling businesses and individuals.

The administration of President Donald Trump has at times been lauded and scorned for its handling of the pandemic.

At first, Trump said warm weather in April could make the virus disappear, remarks that were widely criticised.

After the passage of the CARES Act and daily news conferences with top health officials, such as Dr Anthony Fauci, the public began to trust the president with his approval ratings reaching new heights.

However, states have aired grievances with the federal government, saying Washington is not offering needed medical supplies.

Trump dismissed the claims, saying the US and his administration are handling the outbreak better than anyone else.

Cuomo said on Wednesday that despite high death toll, "there is no doubt" the state is bending the curve.

New York recorded its highest daily death toll - 779 - on Tuesday. The state's death toll increased by 731 the day before.

"Don't start doing a retrospective like it's over," Cuomo told a daily briefing on the states' coronavirus response, urging residents to stay at home as much as possible. "We are not through it. It's not over."