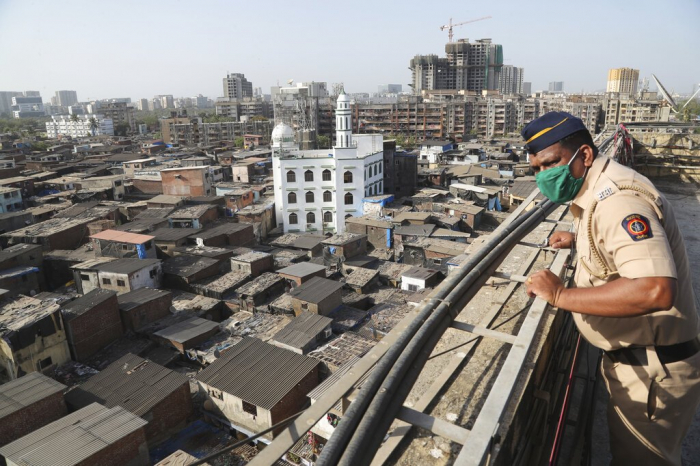 Coronavirus cases in Mumbai's densely populated Dharavi slum -- one of Asia's biggest -- have risen to 43 including four deaths, officials said Sunday as they ramp up testing in a race to contain the spread of the illness.

Since the first virus death in early April, Indian authorities have stepped up measures to close off areas where cases have emerged in Dharavi, which is home to around a million people.

But 15 new cases and one death were reported overnight, taking the number of infections to 43 in the district made famous by the 2008 Oscar-winning film "Slumdog Millionaire", Mumbai council spokesman Vijay Khabale-Patil said Sunday.

Testing sites have also been set up in recent days to pick up on asymptomatic carriers of the virus, Khabale-Patil said, adding that "as a result more positive cases have emerged".

"We have been running extensive medical camps in Dharavi and other areas of Mumbai to test more people for coronavirus and make sure carriers are not ignored just because they don't display symptoms," he told AFP Saturday.

Local officials also closed all shops, except pharmacies, near so-called "containment zones" in Dharavi from Friday to limit the number of people in public spaces.

India has been in a nationwide lockdown since March 25.

Some states including Maharashtra, where Mumbai is located, said Saturday that the strict measures -- due to be lifted on April 15 -- would be extended until the end of the month.

"The state will show the way to the country even in these tough times," Maharashtra chief minister Uddhav Thackeray said on extending the lockdown in his state.

"On Monday, we will complete five weeks since the first case of coronavirus was reported in the state. We can say that till now we have been successful in preventing the multiplication of the number of cases up to some extent."

Maharashtra has the highest number of cases among India's states and territories, at 1,761 including 127 deaths. India's overall toll on Sunday stood at 8,356 infections including 273 deaths.

Experts have warned that COVID-19 could spread like wildfire in slums where social distancing and self-isolation are all but impossible.

Dharavi's population density is thought to be 270,000 people per square kilometre, according to the World Economic Forum.