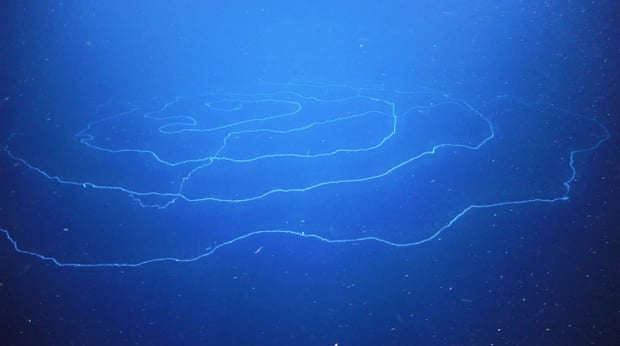 Scientists exploring the deep sea off Australia’s coast have discovered as many as 30 new marine species – and what may be the longest animal ever seen, the Guardian reports.

The discoveries were the result of expeditions into Western Australia’s underwater canyons. One of the biggest discoveries was a siphonophore measuring an estimated 150 feet (46 metres). Siphonophores are deep-sea predators made up of many small clones that act together as one and spread out like a single long string in the water. Researchers think this particular siphonophore may be the longest yet found.

The expedition also collected a number of other deep-sea animals that the researchers suspected had not yet been documented, including an octopus squid, a long-tailed sea cucumber, glass sponges and the first giant hydroids – a colony of animals that looks like an upside-down jellyfish – ever seen in Australia.

Nerida Wilson, a senior research scientist at the Western Australia Museum, who led the expedition, said the discovery of the extra-long siphonophore came when many researchers on board were least expecting it. The research vehicle dived as deep as 4,439 metres, but the siphonophore was only discovered as the vehicle was making its way back to the surface at around 630 metres.

“Most scientists had drifted out of the control room,” Wilson said. “The word soon spread and people came pouring into the control room to share the excitement. It was just amazing to see this huge organism spread out like a spiral UFO, hovering in the water column. We couldn’t believe what we were seeing.”

Siphonophores, like jellyfish, feed by dangling stinging tentacles in the water. Small crustaceans and fish unlucky enough to swim into this curtain of tentacles are paralyzed and reeled up to the body of the colony.

The new siphonophore was about twice as long as many blue whales, and three times as long as a humpback whale, which usually grow to around 50ft long.

The expedition was led by the Schmidt Ocean Institute, a non-profit group that supports oceanographic research, including the provision of a research vessel and remotely operated vehicle, which the Australian government and scientific institutions otherwise lack.

The discovery of the siphonophore and other possibly unknown species was made in a protected area known as the Gascoyne Coast bioregion. This highlights what Wilson described as “one of the disconnects between where we are with ocean conservation and knowledge”.

“While it’s a protected area, we actually have no idea what lives there,” she said. “We really wanted to reveal the incredible biodiversity that is there.”

Wilson acknowledged it will be months or years before researchers will be sure that the organisms they discovered are new to science. “We were definitely looking for and expecting new species,” she said. “Those waters were just too unexplored to not yield such treasures.”