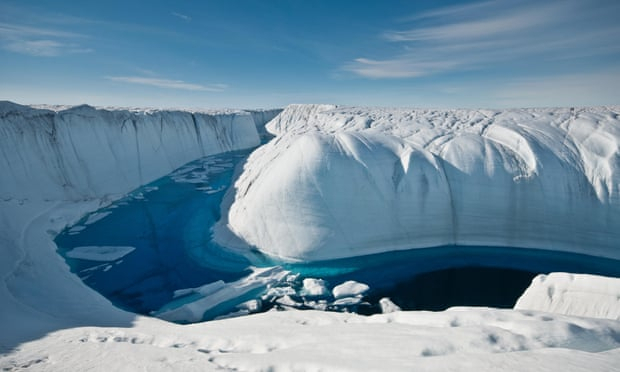 There was a dramatic melting of Greenland’s ice sheet in the summer of 2019, researchers have confirmed, in a study that reveals the loss was largely down to a persistent zone of high pressure over the region, the Guardian reports.

The ice sheet melted at a near record rate in 2019, and much faster than the average of previous decades. Figures have suggested that in July alone surface ice declined by 197 gigatonnes – equivalent to about 80 million Olympic swimming pools.

Now experts have examined the level of melting in more detail, revealing what drove it. Crucially, the team note, the high pressure conditions lasted for 63 of the 92 summer days in 2019, compared with an average of just 28 days between 1981 and 2010. A similar situation was seen in 2012, a record bad year for melting of the ice sheet.

The team say the climate models of the Intergovernmental Panel on Climate Change (IPCC) have not taken into account such unusual conditions. If such high pressure zones become a regular annual feature, future melting could be twice as high as currently predicted, a result that could have serious consequences for sea level rise.

“This melt event is a good alarm signal that we urgently need to change our way of living to hold [back] global warming because it is likely that the IPCC projections could be too optimistic for [the] Arctic,” said Dr Xavier Fettweis, co-author of the research from the University of Liege, adding that the atmospheric conditions were unlikely to be down to natural climatic variability and could be driven by global heating.

Writing in the journal the Cryosphere, Fettweis and his co-author Marco Tedesco from the Lamont-Doherty Earth Observatory at Columbia University report how they used satellite data, climate models and global weather patterns to explore the melting of the surface of the ice sheet last year.

Among their findings the team report that almost 96% of the ice sheet underwent melting at some time in 2019, compared with an average of just over 64% between 1981 and 2010.

Using models, the pair also found that about 560Gt of meltwater runoff was generated in the summer of 2019. The surface mass balance, the amount of ice the sheet gained from rain and snowfall minus the amount lost through meltwater run off and evaporation, was just 54Gt a year– about 320Gt a year lower than the average across the earlier decades, and the greatest such drop on record.

Further analysis showed the level and distribution of melting to be closely tied to a number of factors, including levels of snowfall and reflection of sunlight – known as albedo – as well as cloudiness and absorption of sunlight. All of these, they note, were influenced by the persistent high pressure zone over the ice sheet last summer.

Dr Poul Christoffersen, a glaciologist at the Scott Polar Research Institute at the University of Cambridge, who was not involved in the study, welcomed the research, noting only 2012 had a higher meltwater runoff in recent years.

“Clearly, this shows that extreme melt events are becoming a lot more frequent,” he said, adding that the new study showed that persistent atmospheric high pressure was an important factor, resulting in clear skies and a lack of snowfall in the south and warm, moist air being brought to northern parts of the ice sheet. “In that sense, the extreme melt years can be seen as natural events exacerbated by climate change,” said Christoffersen.

Prof Andy Shepherd from the University of Leeds said a fall in surface mass balance was concerning. “If that drops below zero, then the ice sheet is no longer viable because in every year it is losing more ice than it gains,” he said, adding that that was not even counting the loss of icebergs. “Even if the glaciers stopped flowing, which is not going to happen, it would mean that the ice sheet still can’t survive,” he said.