The Milky Way may be kicking stars into its outer halo 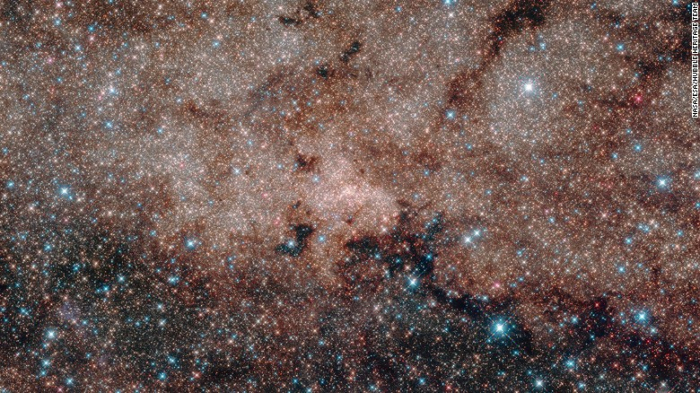 The Milky Way could be flinging stars into its outer halo -- a movement triggered by powerful supernova explosions. Supernovas occur when stars explode and lose most of their mass, CNN reported.

Clusters of supernovas can cause the birth of scattered, eccentrically orbiting stars in the outer stellar halos of galaxies, astronomers from the University of California, Irvine (UCI), have said.

A galaxy's stellar halo extends well out from the brightest regions and contains its oldest stars. The Milky Way's outer halo also contains much of the galaxy's mass.

This is a simulated image of a galaxy that shows young stars kicked towards the galaxy's outer halo by supernovae.

This new finding challenges the commonly held notions of how star systems have formed and evolved over billions of years.

Using "hyper-realistic" computer simulations from the FIRE 2 project (Feedback in Realistic Environments 2), the scientists modeled the disruptions in galactic rotations that would otherwise be considered orderly.

"The FIRE-2 simulations allow us to generate movies that make it seem as though you're observing a real galaxy," lead author Sijie Yu, a UCI doctoral candidate in physics, explained.

According to researchers, the simulations suggest that the Milky Way has been thrusting stars, which is triggered by the powerful supernova explosions.

"These highly accurate numerical simulations have shown us that it's likely the Milky Way has been launching stars in circumgalactic space in outflows triggered by supernova explosions," study author James Bullock said in a statement. Bullock is dean of UCI's School of Physical

Sciences and a professor of physics and astronomy.

"It's fascinating, because when multiple big stars die, the resulting energy can expel gas from the galaxy, which in turn cools, causing new stars to be born," he added.

According to Bullock, the distribution of stars extends beyond the classical disk of a galaxy.

Astronomers had assumed that galaxies were constructed over long periods of time. They believed that smaller groups of stars would enter the galaxy and be broken down by it. This would kick some of those stars into more distant orbits.

But researchers from UCI think that this so-called "supernova feedback" could in fact be the source for up to 40% of outer-halo stars.

"They show us that as the galaxy center is rotating, a bubble driven by supernova feedback is developing with stars forming at its edge," Yu said. "It looks as though the stars are being kicked out from the center."

Researchers said that there is a "fair amount" of observational evidence to suggest stars are forming in such a way.

"In plots that compare data from the European Space Agency's Gaia mission -- which provides a 3D velocity chart of stars in the Milky Way -- with other maps that show stellar density and metallicity, we can see structures similar to those produced by outflow stars in our simulations," Yu said.

The study was published in the Monthly Notices of the Royal Astronomical Society journal on Monday.