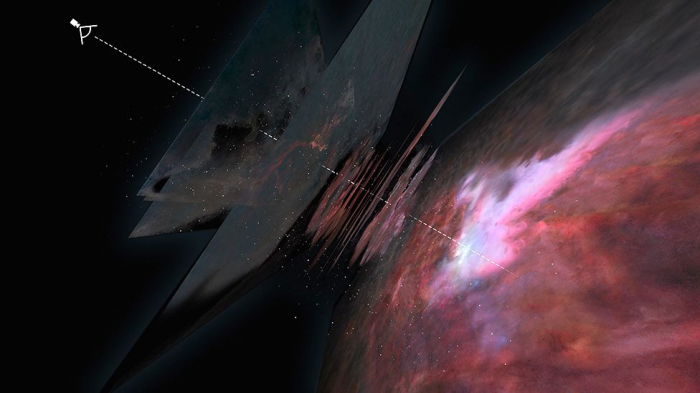 New techniques are being used to transform images from the Hubble Space Telescope into spectacular 3D visualisations of the Universe.

Today the Hubble Space Telescope - affectionately known as "our eye on the Universe" - celebrates 30 years in orbit around Earth. To mark the occasion, astronomers have released a special anniversary image of two nebulas, which lie within a satellite galaxy of the Milky Way called the Large Magellanic Cloud.

It's the nearest Hubble gets to having to a birthday present. But this year, there's a second part to the present, because accompanying the image is a "3D scientific visualisation" - offering the incredible sensation of floating through outer space to see what Hubble saw, first-hand.

Whilst the image comes from Hubble's main camera. Its 3D representation is the product of weeks of work by a team of visualisation specialists at the Space Telescope Science Institute (STScI) in Baltimore, US. 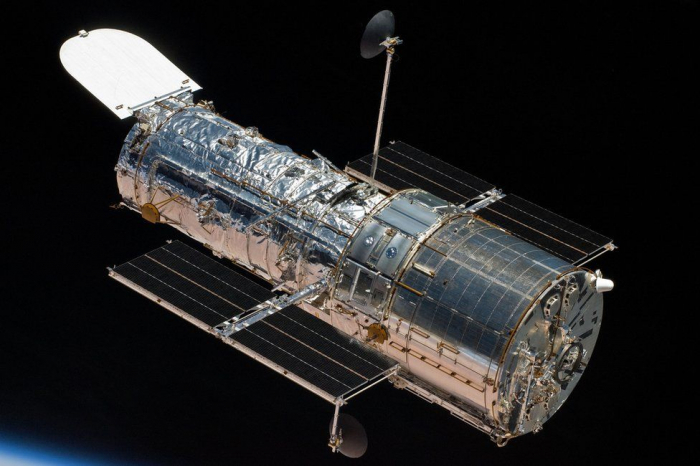 The team led by Greg Bacon and Dr Frank Summers has transformed many of Hubble's most awe-inspiring images into 3D visualisations - from the spectacular Orion Nebula to the fabulous Whirlpool Galaxy and ethereal Horsehead Nebula.

A nebula is a giant cloud of dust and gas in space. Some nebulas come from the gas and dust thrown out when a dying star explodes. Others are regions where new stars are beginning to form.

Much of the visualisation team's incredible work is showcased on tonight's Horizon programme on BBC Two which tells the story of the Hubble Space Telescope.

"There are several important reasons why we make these visualisations: they bring the Hubble images alive, they showcase the 3D structure of astronomical objects, and they are visually compelling with widespread appeal well beyond the science-attentive public," says astronomer Dr Frank Summers.

"Our hope is that the public will not only marvel at the splendours of the cosmos, but also intuitively develop a more scientific mental model of the Universe."

One of the most mind-blowing of the visualisations takes the viewer on a remarkable journey, flying across the Universe to witness almost 13 billion years of cosmic evolution.

As incredible as it seems, all the hundreds and thousands of galaxies you see in this visualisation come from a single image taken by Hubble.

It's called the "Hubble Ultra Deep Field" and was created when Hubble stared at a small patch of sky for the equivalent of more than 11 days to see some of the most distant galaxies ever observed.

To make the visualisation, the team cut-out 5,333 galaxies from Hubble's image and then extrapolated the distance of each galaxy (using "redshift" measurements) and carefully placed them one-by-one into a virtual 3D space.

The distance scale was compressed by a factor of a few hundred to make the fly-through feasible. But apart from this, it's an authentic 3D representation of Hubble's image. 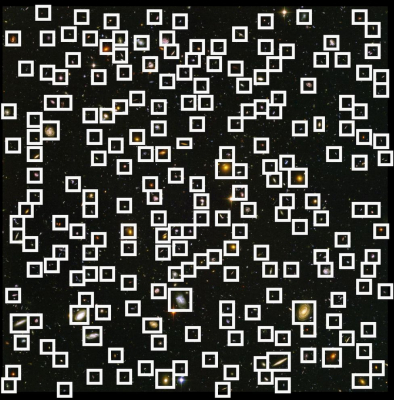 According to Dr Frank Summers: "The vast growth of computers, along with graphics software for feature films, has helped fuel our expansion of astronomy visualisations. We can now handle much larger images and datasets as well as render high-resolution, complex scenes that would have been impossible before. Further, we get to ride on the coattails of expensive software investments made for fiction and fantasy, then utilise the appropriate parts of those packages for scientific purposes."

The Pillars of Creation in 3D

Every Hubble visualisation brings its own unique set of challenges. A good example is the 3D scientific visualisation of arguably Hubble's most iconic image and one of the great celestial wonders of the Milky Way: the magnificent Pillars of Creation.

It was produced for Horizon by visualisation specialists at the European Southern Observatory (Eso) and takes the viewer on an exhilarating journey: flying 100 light-years into a giant hollowed-out cloud of dust and gas called the Eagle Nebula. Upon reaching the Pillars of Creation, the view transitions to infrared, revealing embryonic stars within the columns of gas.

Hubble most recently observed the Pillars in 2014 in visible and infrared light. To show the surrounding nebula landscape, visualisation specialists Luís Calçada and Martin Kornmesser chose to supplement Hubble's images with other observations - from Eso's La Silla Observatory in Chile and the Digitized Sky Survey. 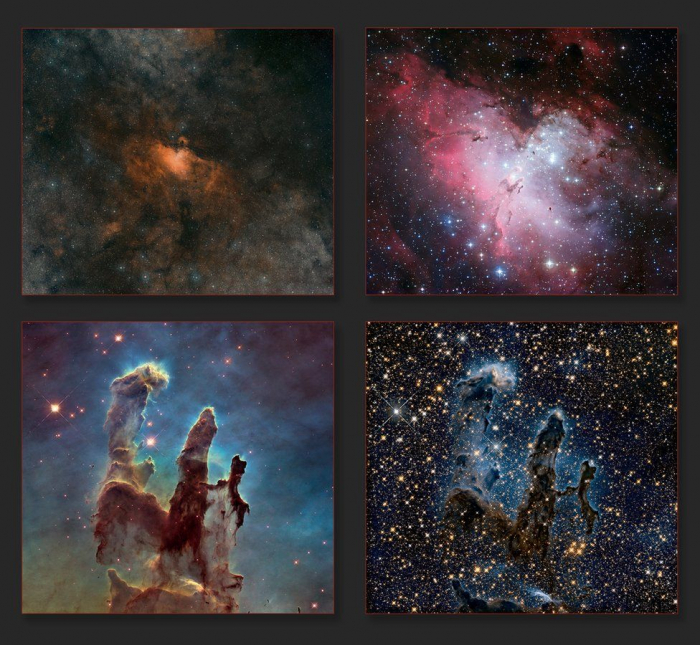 The first job in creating the visualisation was to build a 3D representation of the Eagle Nebula. To do this, the team first removed the stars from the images, and then extracted the nebula's many shapes and layers, before re-assembling these "cut-outs" in 3D space. Akin to erecting scenery on a theatre stage, except this stage spans 100 light-years!

"This is a very intuitive process - visually judging which layers of gas are foreground, which are background, how they interact with the light from the stars at its core," says Luís Calçada. 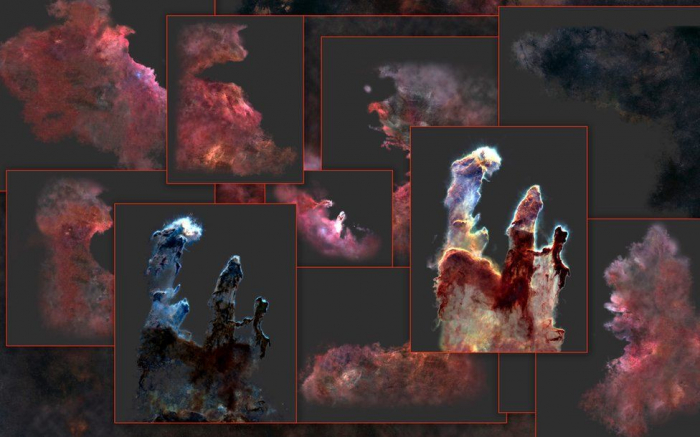 The team extracted shapes and layers from the telescope images..., Photo Credit: ESO 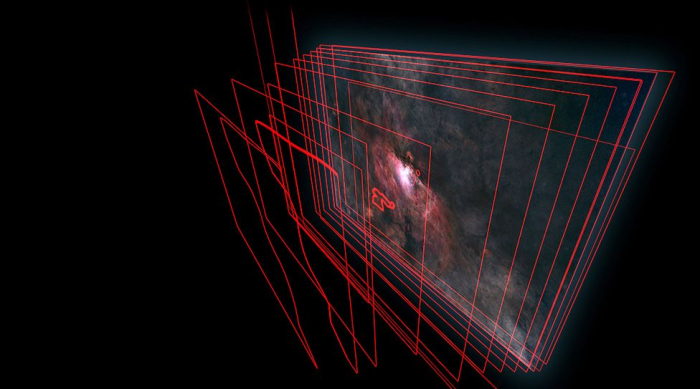 ...and then assembled these into 3D space, Photo Credit: ESO

To add the missing stars back in, the team used data from Esa's "Gaia" spacecraft - which has mapped the 3D position, brightness and colour of more than a billion stars in the Milky Way. This allowed them to accurately recreate approximately 4,000 "synthetic stars" within 1,000 light-years either side of the nebula.

Having built the nebula, this left the daunting task of creating a 3D representation of the pillars.

The tallest pillar actually stands behind the two other pillars and each is at a particular angle. The team used data from the Very Large Telescope in Chile to accurately position and orientate the pillars in 3D space. They then "sculpted" a 3D model of the pillars - and mapped-on Hubble's beautiful imagery.

The end result is a visualisation based on real telescope images and data, but with intuition and extrapolation filling in the gaps where the data is lacking. 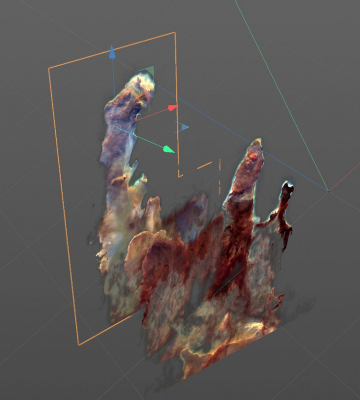 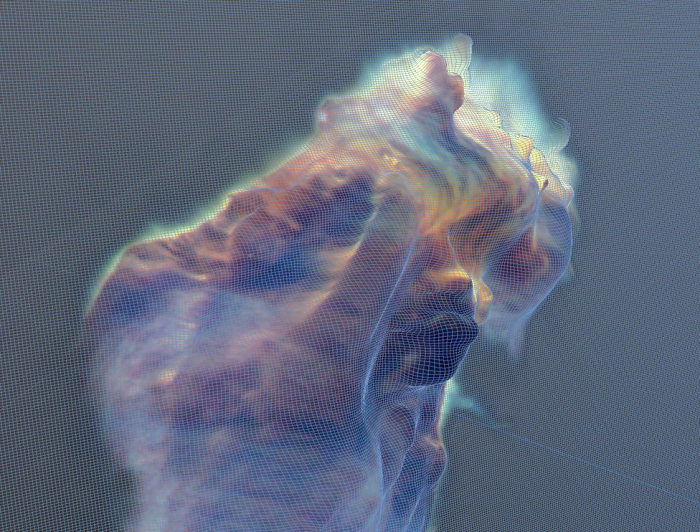 The final task was to sculpt a 3D model of the pillars and map-on Hubble’s imagery, Photo Credit: ESO

According to Luís Calçada: "Conveying a correct sense of scale of the nebula was perhaps the hardest challenge. Processing, importing and lining up the Gaia catalogue stars to our reconstructed 3D nebula was also quite a difficult task, since we wanted to render an aesthetically pleasing nebula, but also one which was realistic."