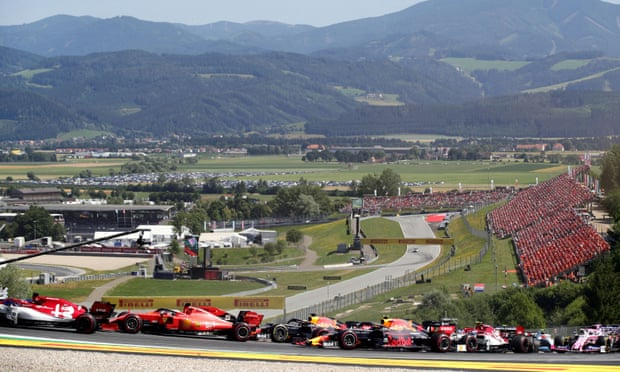 Formula One plans to start the season in Austria on 5 July and stage between 15 and 18 grands prix this year with the opening races behind closed doors.

The announcement came immediately after the French Grand Prix was cancelled and the news the British Grand Prix will be held without spectators if it goes ahead.

The French GP on 28 June is the 10th race to fall to the coronavirus outbreak and its cancellation had been expected after Emmanuel Macron banned mass gatherings until July.

F1 has been planning and discussing how and when the season may begin and Austria, where lockdown restrictions have been relaxed, was expected to host the first race.

“We are now increasingly confident with the progress of our plans to begin our season,” said Chase Carey, the chairman of the F1 group. “We’re targeting a start to racing in Europe through July, August and beginning of September, with the first race taking place in Austria on 3-5 July.”

Carey indicated plans to extend the season into January had not been pursued. “September, October and November would see us race in Eurasia, Asia and the Americas,” he said. “Finishing the season in the Gulf in December with Bahrain before the traditional finale in Abu Dhabi, having completed between 15-18 races. We will publish our finalised calendar as soon as we possibly can.”

Silverstone has concluded it would not be possible to stage the British GP with fans present. The circuit is talking to the department for digital, culture, media and sport about a closed-doors race on 19 July.

F1 is considering holding two races back to back in Austria and Britain to make the best use of the limited time remaining. All planning is subject to the restrictions imposed by the coronavirus outbreak.

“We expect the early races to be without fans but hope fans will be part of our events as we move further into the schedule,” Carey said. “We still have to work out many issues like the procedures for teams to enter and operate in each country. The health and safety of all involved will continue to be priority one and we will only go forward if we are confident we have reliable procedures to address both risks and possible issues.”

Races behind closed doors will have no way of recouping hosting fees and it is reasonable to assume F1 would have to waive fees in order for races to take place. Silverstone’s organisers declined to comment on the financial arrangements of a closed-door race but is going ahead with planning, which suggests an agreement has been reached. Staging races without fans goes some way to meeting commitments to broadcasters and sponsors.

Should Austria host two races on 5 and 12 July, a week off would then be required if Silverstone was also to hold two, shifting the first race here to 26 July. The circuit has said it is willing to move the event.

The Belgian GP will almost certainly have to move from 30 August, because public gatherings are banned until the end of August. F1’s new calendar is expected to be a complete rescheduling of the remaining events.

Silverstone said tickets will be refunded or carried over to next year. The circuit is to give thousands of tickets to NHS and key workers for the 2021 race.

“We have left this difficult decision for as long as possible,” said Stuart Pringle, the Silverstone managing director, “but it is abundantly clear, given the conditions in the country and the government requirements in place now and for the foreseeable future, that a grand prix under normal conditions is just not going to be possible.”

The French GP is the third race to be cancelled rather than postponed, alongside Australia and Monaco, with organisers now focusing on next season.

“Given the evolution of the situation linked to the spread of the Covid-19 virus, the French Grand Prix takes note of the decisions announced by the French state making it impossible to maintain our event,” said the French GP director, Eric Boullier. “The eyes of the Grand Prix de France are already turning towards the summer of 2021.”