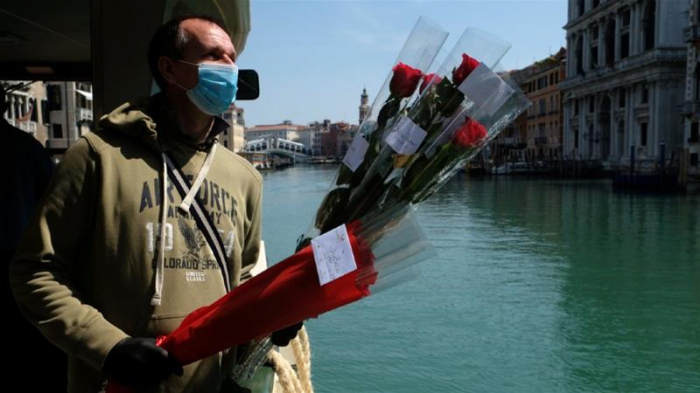 The northern region of Veneto, one of Italy's early coronavirus hotspots, broke ranks with the national government on Monday and announced it would lift some lockdown restrictions a week ahead of schedule.

Prime Minister Giuseppe Conte on Sunday set May 4 as the long-awaited start date to begin rolling back the coronavirus curbs, which are among the toughest in the world.

Deaths from the epidemic in Italy climbed by 333 on Monday against 260 the day before, the Civil Protection Agency said, but the daily tally of new cases declined to 1,739 from 2,324 on Sunday, the lowest count since March 10.

Conte's plan is for a gradual easing of measures over the coming month, which dashed the hopes of many Italians - confined to their homes for seven weeks and hoping for a more rapid reopening.

"This is the best way to fuel social conflict," Veneto governor Luca Zaia said, referring to the government's softly-softly approach.

"We can't become a laboratory or guinea pigs, we also have to live," said Zaia, a veteran politician with the far-right League party, which rules a swath of northern Italian regions but is the main opposition party in the national parliament.

Using his powers as a regional chief, Zaia - who has previously opposed LGBT adoption, supported a referendum over Venetian independence and said Chinese people eat live mice - said he was authorising residents in Veneto, which includes the cities of Venice and Verona, to leave their homes from 6pm (16:00 GMT) on Monday and exercise freely, including going for bike rides.

Previously, people were able only to go for walks or jog in the close vicinity of their own homes.

From Tuesday morning, people would be able to travel around the region to visit second homes, if they had them, or to carry out maintenance work on boats, if they needed to. Drive-through takeaway outlets will also be able to open.

"The approach must be a bit more rational and understand that sacrifices can be made but without prolonging them in this way," Zaia said, explaining his decision to speed things up.

Almost 27,000 people have died in Italy after contracting the coronavirus since the contagion first came to light in Veneto and neighbouring Lombardy on February 21 - the second-highest death toll after that of the United States. Researchers believe the virus may have arrived in Italy weeks before it was officially recognised.

After an initial surge, the number of cases rapidly slowed in Veneto, while Lombardy has struggled to contain the spread. As of Monday, Veneto had registered 17,579 cases against 73,479 in Lombardy, which is also run by a League administration.

Conte has warned repeatedly about the need for caution, saying a rapid easing of restrictions could lead to a new outburst, which Italy could ill-afford to tackle.

No other governors appeared ready to join Zaia in removing some curbs immediately.

However, Conte faced tough criticism from other quarters for his highly circumspect approach, including from the Roman Catholic Church, which was upset over his decision to maintain a ban on religious services, including masses.

In a strongly worded statement, Italy's bishops said they could "not accept seeing the exercise of freedom of religion being compromised" and accused the government of "arbitrarily" excluding mass from the rollback timetable.