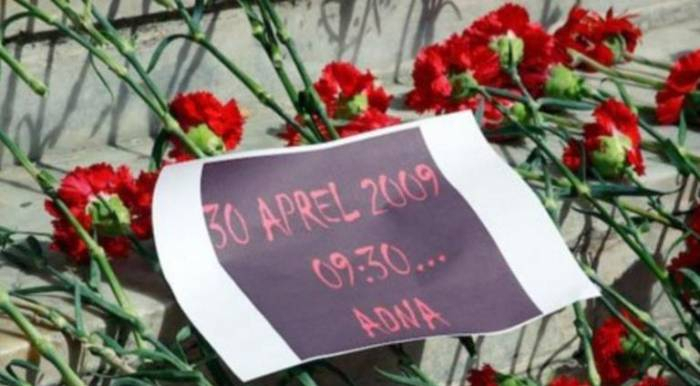 11 years have passed since the terrorist attack at the Azerbaijan State Oil Academy.

Georgian citizen of Armenian national Mardun Gumashian is an originator of the mass shooting at the Azerbaijan State Oil Academy.

A gunman entered the building, where the faculties “Oil gas field” and “Oil engineering” of Azerbaijan Oil Academy located in Dilara Aliyeva Street, 227, and shot at everybody he met from the first floor up to the six-floor. 12 were killed, 13 wounded in the aftermath of the shooting. Responsible employees of the special task police unit, district police and prosecutor’s offices immediately arrived at the site. Seeing he will be rendered harmless by the police the criminal committed suicide. He was identified as the Georgian citizen Gadirov Farda Asad, 29.

The General Prosecutor’s Office and the Ministry of Internal Affairs established operational investigative group and most of the persons contacted with Gadirov were brought to justice.

The criminal case launched against Farda Gadirov was dropped because of his suicide.

The Court of Grave Crimes holds hearing on this criminal case now.

The investigators identified Georgian citizen of Armenian national Mardun Gumashian as an originator of the mass shooting at the Azerbaijan State Oil Academy.

According to the indictment, Gumashian Mardun Grigorievich was born in Marneuli region of Georgia in 1951. He established a criminal group together with Gadirov Farda Asad Amirov Javidan Farman Aliyev Nadir Shirkhan and Suleymanov Najaf Novruz and struck a bargain with them to commit a terrorist attack in Baku on the basis of ethnic hostility against Azerbaijanis. He promised them $US50 000 giving $US5000 to Gadirov, who bought a pistol and practised to shoot. The terrorist group arrived in Baku in March 2009. Amirov offered to commit a terrorist attack at the Azerbaijan State Oil Academy’s building in the central part of Baku to create fear among the people.

Mardun Gumashian observed the aggressive character and greediness of Gadirov, who hated the people and could easily fall under the influence. He also observed poor conditions of Javidan Amirov and Nadir Aliyev, who intended to earn money.

Gumashian decided to use these people to commit terrorist attacks in Baku. Azerbaijani law-enforcement agencies are taking necessary measures to bring the Georgian citizen of Armenian national Mardun Gumashian, who originated mass shooting at the Azerbaijan State Oil Academy. Gumashian was declared wanted by Interpol.