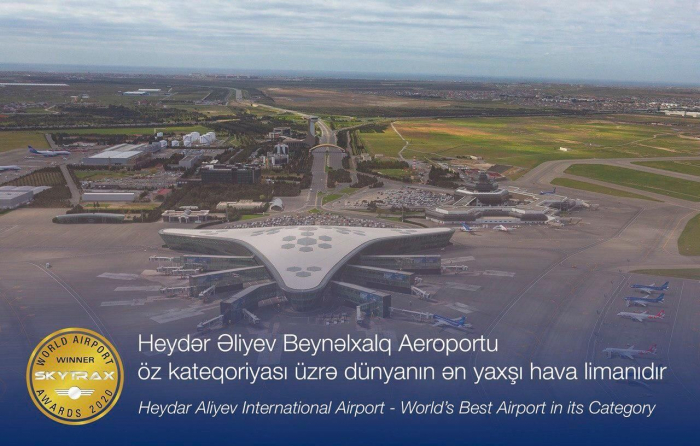 Heydar Aliyev International Airport was once again awarded the prestigious Skytrax World Airport Awards, according to the airport's press service.

Based on the results of the conducted audit, the airport of Azerbaijan’s capital was named the best among all world airports with annual passenger traffic of up to 5 million people.

This was ahead of airports from many different global regions, including Europe, South America, the Middle East, and the Americas.

Moreover, Heydar Aliyev International Airport was recognized as the best among the air harbours of all CIS countries for the fourth year in a row.

Due to the COVID-19 pandemic and the suspension of international passenger traffic around the world, this year the Skytrax World Airport Awards ceremony was published online from London.

“We have a sense of immense pride for our airport being once again granted the highest Skytrax award. Thanks to the direct attention and constant care of the President of the Republic of Azerbaijan, Mr. Ilham Aliyev, the civil aviation of our country is developing rapidly achieving further significant success in the international arena. And today's high recognition is a great honour for all of us. Despite the suspension of most flights, I’m sure that with the resumption of airline’s operations the Baku airport will continue to provide the full range of services at the highest level,”- said the President of AZAL, Mr. Jahangir Askerov.

“Baku Heydar Aliyev Airport has established itself amongst the world's favourite regional airports and clearly continues to delight passengers on each journey. Certainly, within the region, the airport is a leader for the terminal design, passenger comfort, and facilities which is a big factor in the support it receives,” - said Mr Edward Plaisted, CEO of Skytrax.

The World Airport Awards are the most prestigious accolades for the airport industry, voted by customers in the largest, annual global airport customer satisfaction survey. They are regarded as the quality benchmark for the world airport industry, assessing customer service and facilities across over 550 airports. The survey and awards are independent of any airport control or input.

The Awards are based on the World Airport Survey questionnaires completed by over 100 nationalities of airport customers during the 6-month survey period. The survey evaluated the customer experience across airport service and product key performance indicators - from check-in, arrivals, transfers, shopping, security and immigration through to departure at the gate.