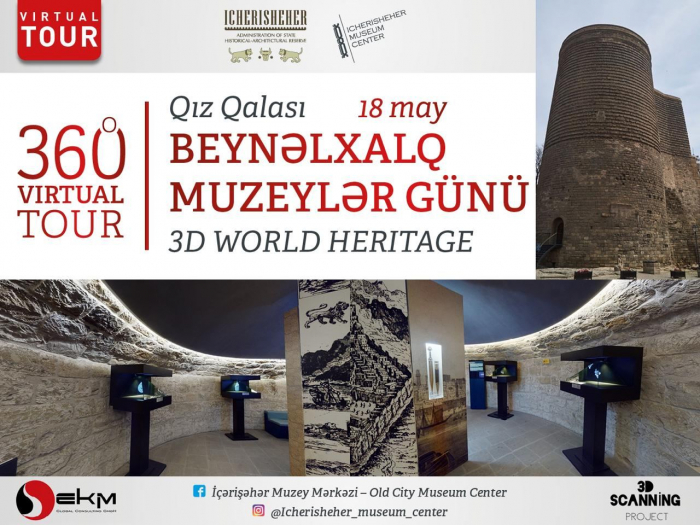 This year is highlighted with the 20th anniversary of Icherisheher's inclusion (together with the Shirvanshahs' Palace Complex and Maiden's Tower) in the UNESCO's World Heritage List. In this regard, "Icherisheher" Museum Center has launched a new project, such as a scan of the cultural and historical heritage of the Old City, starting with the Maiden Tower.

The World Heritage 3D Scanning programme is a visualization and documentation of historical monuments, where special files are created for the digital archive of cultural heritage site. A DWG file is a 3-D file for any 3-D Software.

This software stores data in digital media that can be professionally used to rebuild and restore an object if a monument or object is collapsed as a result of a cataclysm while scanning at full size.

3-D (360°) virtual tour on Maiden Tower is for the first time ever presented with information desks in two languages on all floors, a visualization of panoramic view of the city from the top of the tower and a link for virtual tour of embed code that can be placed on the website.


In the field of cultural heritage management, in which the accuracy and professional documentation of data on sites is very important, the availability 3-D scanning plays an exceptional role. This function creates more accurate and detailed data about the monument, will assist in future conservation and restoration work, and will have a major impact on further archaeological research.

The appearance of the tower conforms to a cylindrical shape completed by the counterfort of the same height with the construction. The eight storeys are separated from one another by stone flooring and connected by means of stone staircases.

Many researchers state that Maiden Tower was initially built for religious purposes and that it was a temple where religious ceremonies were held. For some scholars it was a "hut" of the Zoroastrians. On this basis they date Maiden Tower to the 8th -7th centuries B.C. According to some hypotheses this monument was used as an ancient observatory. Some scholars believe that the Tower was a fortified part of the Shirvanshahs’ defensive structure and was used to send signals from the top to other towers in times of danger.

You can view the 3D virtual tour on Maiden Tower HERE .