Scientists may have discovered where stress lives in the human brain 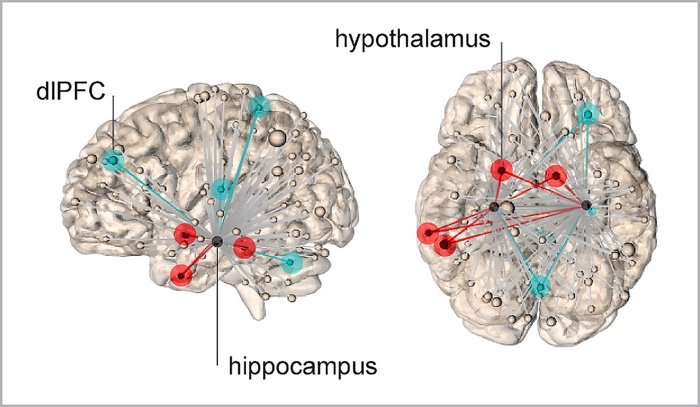 We live in stressful times, there is no denying it. But while the subjective sensation of stress is ubiquitous and seemingly an inescapable element of the human condition, there's still much we don't understand about how our darker feelings come about.

When we experience physiological stress – such as pain, hunger, or some other immediate, physical stressor – the hypothalamus triggers the production of hormones called glucocorticoids from our adrenal glands, helping to mediate our stress response.

But what about subjective stress, which we might otherwise think of as emotional or psychological stress: where do those negative feelings of pressure, anxiety, and foreboding exist in the brain?

Scientists don't know for sure, but previous research has indicated that subjective or emotional feelings of stress (hereafter just 'stress') aren't always related to physiological stress, suggesting the neurobiological origins of stress could lie elsewhere.

As for where that might be, much evidence in both animals and humans points to mechanisms involving the hippocampus – a region of the brain that helps regulate memory, emotion, and navigation. While the hippocampus' ties to stress have been much studied, the nature of this link remains unclear.

In a new study, scientists from Yale University got a closer look at what's going on here, giving us a new perspective on how the neurological underpinnings of stress function inside the human brain.

Researchers recruited 60 healthy adults and showed them a series of highly aversive and threatening images designed to produce a form of stress response (such as anger, disgust, fear, and sadness), alternated with various neutral scenes designed to help them relax.

During the experiment, participants had their brain activity measured by functional magnetic resonance imaging (fMRI), and also ranked how stressed and aroused they felt from each set of confronting images.

When the team analysed the results, they found that higher activity linking the hippocampus to the hypothalamus, parahippocampal cortex (PHC), and inferior temporal gyrus (ITG) corresponded with participants feeling more stressed.

This, the researchers explain, was an example of a positive network in terms of the experiment, where greater activity equated to greater stress levels.

By contrast, hippocampal connectivity with the dorsolateral prefrontal cortex (dlPFC), postcentral gyrus, and the cerebellum constituted a negative network, with heightened activity between these clusters indicating people were less stressed in the experiment.

From the looks of things, people's level of stress overall is determined by an adaptive interplay of activity between these two networks, which combine to both instigate and mitigate how stressed they feel.

"Despite the distinct roles of these networks, our findings suggest that individuals engaged both positive and negative networks adaptively to attenuate feelings of stress," the researchers explain in their study.

While we still have a lot to learn about how the hippocampus regulates stress – not to mention other neurobiological mechanisms that are also expected to contribute – the researchers say the discovery of these functional neural networks could one day help in developing future treatments for stress.

"These findings may help us tailor therapeutic intervention to multiple targets, such as increasing the strength of the connections from the hippocampus to the frontal cortex or decreasing the signalling to the physiological stress centres," explains senior researcher and neuroscientist Rajita Sinha.

The findings are reported in Nature Communications.