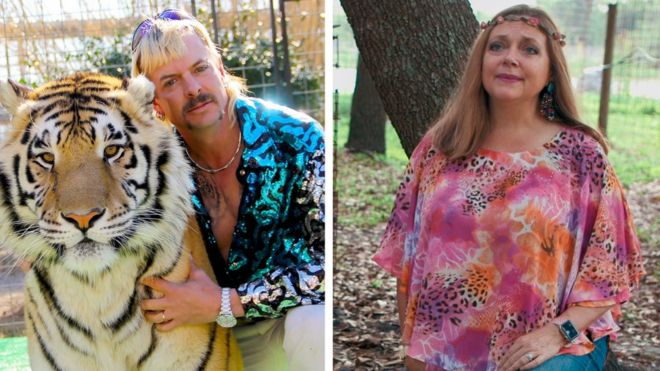 A zoo formerly owned by the star of Netflix documentary Tiger King is to be handed over to the woman he was convicted of trying to have killed.

A federal judge has given Carole Baskin control of Joe Exotic's old zoo in Oklahoma as part of a ruling in a $1m (£800,000) trademark dispute.

Joe Exotic is currently serving a 22-year sentence for his involvement in a murder-for-hire plot and animal abuse.

The zoo's current operator has been ordered to leave within 120 days.

Tiger King, which became a huge hit on Netflix in March, tells of Joe Exotic's colourful life and his rivalry with Baskin, the owner of an animal sanctuary in Florida.

Baskin sued Exotic for trademark infringement in 2011, a case that ended two years later with the latter being ordered to pay Big Cat Rescue $1m.

In 2016, Big Cat Rescue sued Exotic's mother Shirley Schreibvogel, claiming he had fraudulently transferred his zoo to her to avoid paying Baskin and other creditors.

According to documents posted online, US District Judge Scott L Palk found the transfer had been made to "remove [the zoo] from the reach of Big Cat Rescue".

Jeff Lowe, Joe Exotic's former business partner, has been told to vacate the premises in Wynnewood, Oklahoma, and remove all of his exotic animals.