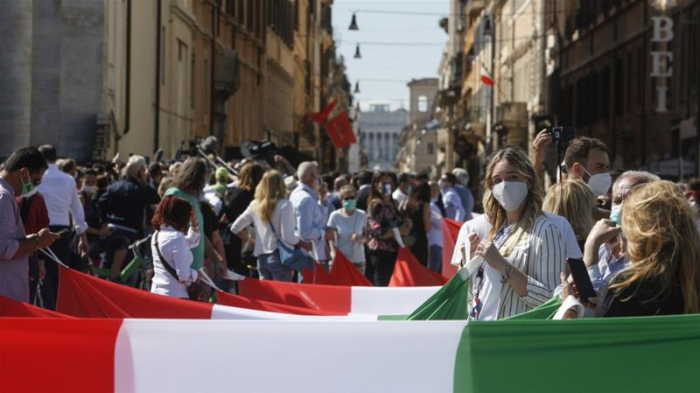 Hundreds of people led by right-wing parties march under the banner 'Italy does not capitulate' marking Republic Day.

The three parties making up Italy's conservative opposition have held a joint rally in Rome against the government's policies amid the coronavirus pandemic.

Matteo Salvini, of the far-right League, led the rally along with Giorgia Meloni of the Brothers of Italy, another far-right party, and MEP Antonio Tajani of Forza Italia.

Hundreds of people marched under the banner "Italy does not capitulate" through central Rome on the national holiday that marks Italy's Republic Day.

Meloni has criticised the government's allocation of aid in response to the virus outbreak as excessively bureaucratic.

She said the pandemic is causing "social unease" and Prime Minister Guiseppe Conte does not understand the economic dangers.

People took to the streets, carrying a long Italian flag, despite calls by organisers that they support the event on social media instead, due to the risk of infection.

The crowds chanted "freedom" and "elections now". Similar rallies were planned in dozens of other cities.

President Sergio Mattarella laid a wreath at the Altar of the Fatherland national unity monument near Piazza Venezia on Tuesday morning in Rome, together with Conte.

A military parade would usually mark the event but was cancelled due to the coronavirus pandemic.

Mattarella then travelled to Codogno, in Lombardy, the heart of the outbreak in Italy, and gave a speech commemorating the 33,000 dead due to the virus, ANSA news agency reported.

Italy's Republic Day marks a referendum in 1946 when the country chose to become a republic instead of a monarchy.