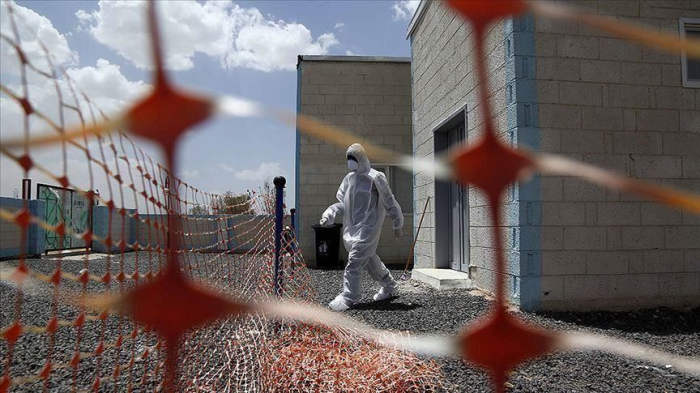 The global death toll from the coronavirus that causes COVID-19 rose above 380,000 on Wednesday after Brazil recorded its biggest one-day increase since the start of the outbreak, and protests about the death of George Floyd in Minnesota last week spread around the world.

Brazil counted a record 1,262 deaths overnight, according to the country’s health ministry, and now has more than 30,000 confirmed fatalities from COVID-19.

There were demonstrations in cities including Paris, Amsterdam, London, Copenhagen, Berlin, Milan, Dublin, Rio de Janeiro, Mexico City, Auckland and Toronto, among others, with protesters chanting, “I can’t breathe,” to mark Floyd’s last words before he died after a white police officer knelt on his neck for more than nine minutes. Public safety experts continue to worry that the gatherings will become mass transmission events with the virus still spreading in many areas.

In the U.S., curfews in cities including New York seemed to calm the tensions of the past few days and there were fewer reports of looting.

Thomas Lee, managing partner and head of research at Fundstrat Global Advisors, noted that with protests starting five days ago and the incubation period for COVID-19 estimated at 14 days, June 11 will mark a crucial date for experts monitoring the spread of the illness.

“If there is no second wave in cases by June 11th, this is a transformational outcome,” Lee wrote in commentary. “The mass exposures did not lead to a second wave.”

The Fundstrat data science team analyzed data on race and ethnicity among COVID-19 cases in 47 states and found that blacks and hispanics account for 53% of U.S. cases, but only 30% of the population. Data has consistently shown that blacks and Latinos are being disproportionately hit by the illness: “Asians and Whites are far less likely to have COVID-19,” the analysis found.

In Sweden, meanwhile, Chief Epidemiologist Anders Tegnell acknowledged that his country’s controversial approach to the virus has resulted in too many deaths, as the Associated Press reported.

In an interview with Swedish radio, Tegnell said in future he would seek a compromise between the restrictions and stay-at-home measures introduced in most countries to contain the spread that have created economic hardship and Sweden’s decision to leave businesses open and rely on its citizens’ sense of civic duty.

“If we were to encounter the same disease again knowing exactly what we know about it today, I think we would settle on doing something in between what Sweden did and what the rest of the world has done,” Tegnell said.

Sweden has suffered 4,468 fatalities from the illness, far more than neighboring Finland, Denmark and Norway. Finland has suffered 320 deaths, Denmark has 580 deaths and Norway has 237, according to data aggregated by Johns Hopkins University.

Sweden’s death rate per capita was the highest in the world over seven days to June 2 and the government has pledged a commission to review its strategy.

There are now 6.4 million confirmed cases of COVID-19 worldwide and at least 382,435 people have died from it, the Johns Hopkins data show. At least 2.8 million people have recovered.

Peru, Turkey, Iran, Chile, Mexico, Canada and Saudi Arabia are next, all ahead of China, where the illness was first reported late last year. China has 84,159 cases and 4,638 deaths.

Dr. Anthony Fauci, head of the National Institute for Allergy and Infectious Diseases (NIAID), said Tuesday he is cautiously optimistic that a vaccine will be developed to treat COVID-19 “within a reasonable period of time.” However, it’s still unclear how long a vaccine might offer protection, said Fauci, via remote video during The Wall Street Journal’s Tech Health Conference.

Fauci mentioned Moderna Inc.’s MRNA, +0.03% vaccine trial which the NIAID is supporting and said, ““we are really optimistic we’re going to be able to be successful” after the product candidate showed positive signs in an early study. The good news is that more than 2.8 million people have been able to recover from COVID-19, a strong recovery rate compared with other infectious diseases, including HIV, he said.

“Given that the body can make a good response against coronavirus, we feel cautiously optimistic that if we mimic safely natural infection with our vaccine, we will be able to induce a response in a person that would be equivalent to the response that natural infection induces,” Fauci said.

Separately, Gilead Sciences Inc. GILD, +1.55% stock was upgraded on Wednesday by SVB Leerink on high hopes for remdesivir, a former ebola therapy that is being repurposed as a treatment for COVID-19 with an emergency use authorization from the U.S. Food and Drug Administration.

“With these additional opportunities we believe a valuation of $94+ is realistic, perhaps as soon as the company declares its price for commercial sale of remdesivir,” Porges wrote in a note to clients. He expects Gilead to price remdesivir at around $5,000 for a course of treatment, at the list price in the U.S.

What are companies saying?

Zoom Video Communications Inc. ZM, +7.58% blew past earnings estimates for the first quarter on Tuesday as expected as it benefited from its popular videoconferencing service during the pandemic.

The company posted stunning sales growth of 169% from the year-earlier period, somewhat justifying the tripling of its market capitalization in the year to date, as MarketWatch’s Therese Poletti wrote.

Aleksandr Zukin, an analyst with RBC Capital Markets, said on a conference call that he believed Zoom had one of the best all-time quarters in enterprise-software history, if not the greatest. “But with that opportunity also comes a question, which is, ‘Where does Zoom go from here?’” he said.

Eric Yuan, founder and chief executive of Zoom, countered that Zoom now knows the total addressable market for the company is bigger than it previously thought. He said there are a lot of opportunities to pursue, but for now, its top priority is to keep its service up and running and double down on security and privacy, after “Zoom bombs” that interrupted school lectures and work calls marred its otherwise spectacular popularity.

There was equally good news Wednesday from Campbell Soup Co., which also handily beat analyst expectations as its canned food and snacks proved popular as comfort foods during the pandemic. Soup sales alone in the U.S. rose 35%, while sales of meals and beverages rose 20%.

“In the quarter, we experienced unprecedented broad-based demand across our brands as consumers sought food that delivered comfort, quality and value,” he said.

Elsewhere, companies continued to raise cash through equity and bond sales and to offer updates on plans and progress with reopening strategies.

Here are the latest things companies have said about COVID-19:

• AMC Entertainment Holdings Inc. AMC, -2.50% issued a profit warning for the first quarter, a week before it reports final results. The company expects its first-quarter net loss to range from $2.117 billion to $2.417 billion, as it books an impairment charge on estimated long lived assets and goodwill of $1.8 00 billion to $2.100 billion. The company had a net loss of $130.2 million for the three months ended March 31, 2019. The cinema chain has taken a hit during the pandemic as its theaters have been closed and are expected to reopen with reduced capacity to allow for social distancing. AMC had a cash balance of $718.3 million as of April 30, including borrowings. It had net cash from operating activities, investing activities and financing activities of a negative $184.0 million, a negative $87.4 million and a negative $312.4, respectively, compared with $1.4 million, a negative $98.5 million and a negative $33.9 million a year ago.

• Canada Goose Holdings Inc. GOOS, +17.74% reported fiscal fourth-quarter earnings that beat expectations. The first quarter is typically the smallest of the year. In response to the coronavirus, Canada Goose has reduced first-quarter cash expenses by C$90 million ($66.6 million) through measures including executive salary reductions of 20%, with Chief Executive Dani Reiss foregoing his salary, and reduced investment in retail and manufacturing. As of June 1, Canada Goose had cash-on-hand of C$119.7 million and C$239.4 million remaining in its revolving credit facility. In the first seven weeks of the fiscal first quarter, 15 of the company’s 20 stores were closed. Stores are open in Hong Kong, Montreal and Paris. Canada Goose is not providing guidance at this time due to the pandemic.

• Cinemark Holdings Inc. CNK, +2.44% reported first-quarter results that missed expectations, as the pandemic resulted in the closing of all of its theaters in mid-March. Admission revenue declined 26.0% to $292.5 million, missing the FactSet consensus of $305.0 million, and concession revenue dropped 24.3% to $190.4 million to miss expectations of $194.9 million. Average ticket price increased 0.6% to $6.39 and concession revenue per person rose 3.2% to $4.16. Chief Executive Mark Zoradi said the company will start reopening theaters in a multi-phased approach beginning June 19.

• Express Inc. EXPR, -7.88% reported a wider-than-expected fiscal first-quarter loss on revenue that declined more than forecast, as the pandemic resulted in store closures. The company has reopened 303 stores, or about half, and will reopen another 58 stores this week. Sales fell 53% in the quarter to May 3 to $210.3 million, missing the FactSet consensus of $289.7 million. Gross margin was a negative 22% of sales, compared with positive 27.1% last year.

• Quest Diagnostics Inc. DGX, -2.53% continues to see a “material decline” in testing volumes as a result of the pandemic. But the company said testing volumes in its base business, excluding COVID-19 diagnostic and antibody testing, have recovered faster than it expected on April 22, with higher recovery in U.S. geographies where local officials are lifting restrictions on movement. “If these testing volume trends in the company’s base business continue, and COVID-19 molecular and antibody testing volume trends continue, then the company believes that its adjusted earnings per share for the second quarter of 2020 could be in the range of breakeven to slightly profitable,” the company said in a regulatory filing.

• Red Robin Gourmet Burgers Inc. RRGB, +11.82% expects to have reopened 270 dining rooms by June 7 with limited capacity, respecting the need for social distancing during the pandemic. That is equal to about 65% of its total current company-owned restaurants, the Greenwood Village, Colo.-based burger chain said in a statement. “To build on the momentum we are experiencing in off-premise and dine-in sales, we are now reopening restaurants in our largest and highest volume markets in the Pacific Northwest and West Coast,” Chief Executive Paul J.B. Murphy III said. “We are pleased with the results we are seeing and look forward to sharing a more detailed business update when we report our first quarter earnings next week.” The company’s earnings will be released on June 10 before the bell.