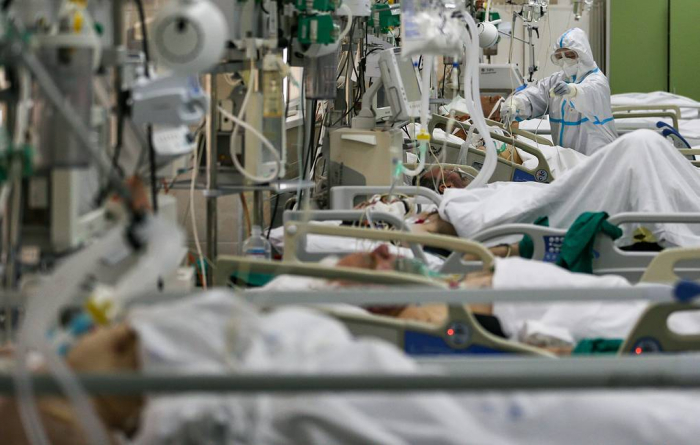 Scientists from Yale University observed reactions of the immune system of men and women to the coronavirus infection, and discovered that T cells, the main "conductors" of the immunity, react to the infection much stronger in the weaker sex; this might explain high COVID-19 incidence in men, the researchers say in their study, whose preliminary results are available on the medRxiv website.

"In this study, we examined sex differences in viral loads, SARS-CoV-2-specific antibody titers, plasma cytokines, as well as blood cell phenotyping in COVID-19 patients. […] Female patients mounted significantly more robust T cell activation than male patients during SARS-CoV-2 infection. […] These findings reveal a possible explanation underlying observed sex biases in COVID-19, and provide important basis for the development of sex-based approach to the treatment and care of men and women with COVID-19," the researchers write.

Since the earliest days of the outbreak in China’s Wuhan, medics noted that the disease much more frequently infects and kills men than women.

Biologists tied these differences to the fact that cells of men’s lungs contain many more molecules of ACE2 protein, which the virus utilizes for infection, than those of women. Later, scientists’ opinions diverged, although most medics continue to believe that men are much more susceptible to this disease.

Yale University researchers, led by Akiko Iwasaki, have revealed one possible reason behind such differences in reaction of male and female bodies’ to SARS-CoV-2, observing development of the disease in two hundred patients at the university hospital, admitted between March and May this year.

All patients were hospitalized during the early stages of infection, which allowed the scientists to observe the immune reaction to the coronavirus infection. To that extent, the medics regularly harvested blood samples and traced changes in the immune system cells’ activity, as well as changes in concentration of molecules produced by them and in the amount of viral particles.

These measurements detected significant differences in men’s and women’s bodies’ reaction to the infection, including the amount of produced antibodies, as well as various signaling substances, which facilitate inflammation and other defensive reactions. In particular, there was more interleukin-8, one of the anti-inflammatory signals, as well as CXCL10 and CCL5 proteins.

By contrast, women’s blood contained more activated monocytes — "cleanup" cells, which collect antigens, as well as those T cells subtypes that use these antigens to produce antibodies.

These differences were especially evident among elderly male and female patients, which might potentially explain why older men die from the coronavirus more often than women.

Therefore, stimulation of production of T cells and their activation in male bodies may potentially make them less susceptible to the coronavirus infection. In the near future, Iwasaki and her colleagues will attempt to find out how this could be done, without exposing the patients to an even greater risk than SARS-CoV-2 infection.