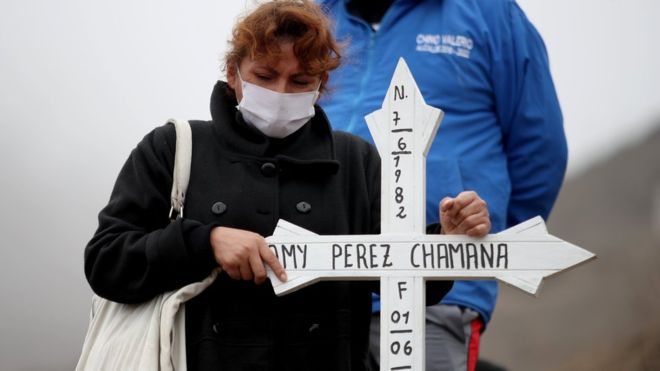 Peru's economy sank by more than 40% year-on-year in April, its worst-ever percentage drop in output, amid a lockdown imposed to curb Covid-19.

Mining dropped sharply in the country - one of the world's largest producers of copper, gold and silver.

President Martín Vizcarra called it the "most serious crisis in our history".

Despite sweeping measures, Peru has reported nearly 233,000 cases and more than 6,500 deaths, the second-highest numbers in South America after Brazil.

Peru was one of the first in the region to impose a lockdown to stop the spread of coronavirus, and the police and the army were deployed to enforce it. But experts say this and other measures have not worked properly because large numbers of people disrespect them.

Earlier this month, thousands of street vendors were evicted in the capital, Lima, while reports said social-distancing rules had been largely ignored in rural areas.

Overall, economic activity fell 40.49% in April compared to the same time last year, according to the government's statistics agency Inei (in Spanish).

Mining represents 60% of the country's exports, and production was drastically scaled back because of the Covid-19 restrictions. Full operation was allowed to resume in May, and economists believe some recovery is expected in the next few months.

Since January, the Peruvian economy - one of the strongest in Latin America over the last decade - has shrunk by 13.1% on a year-to-year basis, Inei says.

Between March and May, more than 2.3 million people lost their jobs in the Lima metropolitan area - almost half of the region's workforce.

Speaking during a video conference, President Vizcarra said the impact of the coronavirus outbreak on the economy "was only comparable with what we had during the Pacific War [with Chile] more than 100 years ago".

His centrist government had already announced an aid package to millions of families across the country. On Monday, he unveiled a series of measures to restart the economy, including large infrastructure projects such as hospitals, schools and roads.

On Sunday, the Archbishop of Lima, Carlos Castillo, warned that people faced starving to death as a result of the economic crisis brought on by the pandemic.

The cathedral was filled with more than 5,000 photographs of people who died with Covid-19. Some of them did not receive appropriate medical care as the health system has struggled to cope with the demand, local media reported.

"An even harder moment is coming," he was quoted as saying in a message broadcast during Sunday's Mass, according to AP news agency. "It would be terrible if in the times to come we have thousands of these photos - but [instead of people dead with Covid-19], dead of hunger."

Restrictions in the country of 32 million people are being gradually lifted, but the lockdown imposed on 16 March has been extended until 30 June, making Peru's lockdown one of the longest in the world.

Brazil has become the country with the world's second-highest number of infections - more than 888,000 - and deaths, at nearly 44,000. Experts say the true figures are likely to be higher because of insufficient testing, and the outbreak is still weeks away from its peak.

Chile has extended a state of catastrophe by 90 days amid a surge in cases - in total, more than 180,000 infections have been confirmed with about 3,300 deaths.