Coronavirus Beijing: Why an outbreak sparked a salmon panic in China 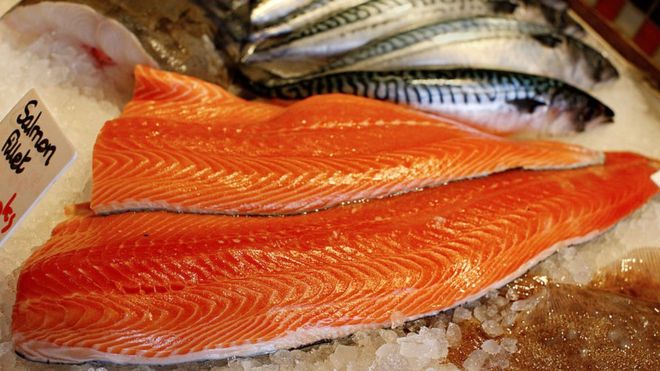 Beijing has in the past week seen a spike of Covid-19 cases - almost all of which have been linked to a huge wholesale food market.

State media said the virus was discovered on chopping boards used for imported salmon at the Xinfadi market - sparking fears across the country.

Supermarkets and restaurants across Beijing hurried to pull salmon from their shelves, and imports from Europe were halted.

On Wednesday it was announced that a 22-year-old man - known to have occasionally cleaned frozen seafood - had tested positive for the virus in Tianjin, near Beijing.

But China's Centre for Disease Control (CDC) said that it was unlikely that salmon carried the virus. So how and why did the panic emerge?

What happened in the market?

Since then, almost 150 cases have been confirmed - almost all of which have been linked to the city's largest wholesale market.

Xinfadi supplies 80% of Beijing's vegetables and meat and is used by tens of thousands of people a day.

But unlike the market in Wuhan, there is no evidence of a wildlife trade in the Xinfadi market.

Traces of the virus were found on a chopping board used by a seller of imported salmon, said reports.

But some 40 samples from the market tested positive for the virus - some of which were not from chopping boards used to cut salmon, said a spokesman for Beijing's Municipal Health Commission.

Could salmon be a host for the virus?

An official at the Chinese Centre for Disease Control said there was no evidence that salmon was the host - or even an intermediate host - for the virus.

Shi Guoqing, deputy director of the CDC's emergency response centre, said there was no trace of the virus on the salmon before it reached the market - suggesting the virus was present in the market, rather than in the salmon itself.

"Viruses must rely on the viral receptor on the host cell surfaces to infect cells. Without the certain receptor they cannot enter into cells successfully," Cheng Gong, a virologist at Tsinghua University told CGTN.

"All known evidence so far suggests this kind of receptors exist only in mammals, not fish."

However, the CDC's chief epidemiologist, Wu Zunyou, said the fish could not catch the virus in their natural habitat - but added that it was possible they were contaminated by workers during their capture or transportation.

Overall, it is still unclear what the original source of the virus is - or where it might have come from, though the WHO has said it cannot be transmitted through food and drink to humans.

"Coronaviruses cannot multiply in food; they need an animal or human host to multiply," the global health body said in a document published on its website.

It also said it was "highly unlikely" that it could spread through food packaging.

Will this affect salmon imports worldwide?

China imports about 80,000 tons of chilled and frozen salmon each year from countries like Chile, Norway, the Faroe Islands and Australia, according to the Global Times.

The virus is not rampant in most of these countries - and Norway has said its salmon was not the source, after Norwegian salmon producers saw orders from China cancelled over the weekend.

Other countries around the globe however, seem largely unfazed by the salmon speculation.

Hong Kong's Centre for Food Safety confirmed that 16 samples of imported salmon from countries including Chile, Iceland and Denmark all tested negative for the virus.

Long queues were also seen outside sushi restaurants in the city.

Singapore's Food Agency has also said there was no evidence that the virus would be transmitted via food or even food packaging - though it said it would monitor "developments in this area".