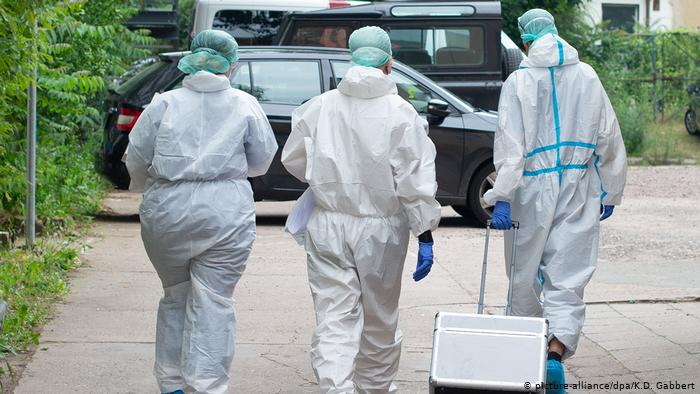 German authorities are bringing back local lockdown measures after an outbreak linked to a meatpacking plant.

More than 1,300 employees of the Tönnies meatpacking plant have now tested positive for the virus.

It is the first return of containment measures since Germany began lifting its lockdown in May.

Mr Laschet said the lockdown would last until 30 June, and described the move as a "preventative measure".

Germany was widely praised for its response to the pandemic but there are concerns infections are rising again.

Lothar Wieler, head of the nation's public health body the Robert Koch Institute (RKI), told reporters on Tuesday the country was at risk of a second wave of infections but said he was optimistic they could prevent it.

Currently the reproduction rate - the R number which indicates how many people one infected person can pass the virus to - in Germany is estimated at 2.76.

But authorities have stressed the outbreaks remain localised.

The R number must be below one for infection rates to fall.

Mr Laschet described the outbreak linked to the nearby Tönnies meatpacking plant as the "biggest infection incident" in the country.

"We have decided that further measures are necessary," he told reporters.

Bars, museums, cinemas and gyms must all close. Social distancing measures are back in force.

There will also be a mandatory quarantine for all employees of the affected plant. Extra police will be deployed to enforce the measures, accompanied by translators to speak to migrant workers.