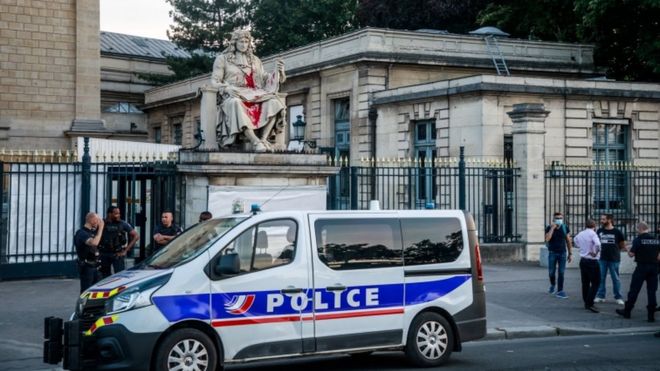 An activist has vandalised the statue of a French statesman outside the country's parliament.

Jean-Baptiste Colbert helped write the Code Noir or Black Code in the 17th Century which defined slavery and race in France's colonial empire.

He sprayed the words "state negrophobia" at the base of the monument before police detained him.

The group Brigade Anti Négrophobie posted the video and the man is himself wearing a shirt bearing their name.

The murder of George Floyd by US police in the city of Minneapolis last month has prompted a wave of demonstrations worldwide against police brutality and institutional racism.

Statues of racist or slave-owning historical figures have also been targeted.

In France there have been mass protests over the death of Adama Traoré, a 24-year-old killed in police custody in 2016. Demonstrators have likened his death to that of George Floyd.

This is not the first French statue to be vandalised in recent weeks. In the northern city of Lille, protesters wrote the words "murderer" and "colonist" on the statue of Louis Faidherbe, a 19th Century governor of Senegal when it was a French colony.

Who was Jean-Baptiste Colbert?

Colbert was a French statesman who served King Louis XIV during the 17th Century.

He earned the nickname "The Great Colbert" for economic reforms he put in place as France expanded its colonial empire overseas.

In the 1680s, he helped write the Code Noir on the orders of the king. It set out a number of regulations for French colonies in the Americas and the Caribbean, including banning Jewish people from all France's colonies, defining how slavery would work, and restricting the freedoms of free black people.

As protests have spread in France in recent weeks Colbert has become an increasingly controversial figure.

Colbert's statue sits outside the French parliament, the National Assembly. There is also a building inside named Colbert Hall, and other structures around the country bearing his name.

Jean-Marc Ayrault, former prime minister and the president of France's Foundation for the Remembrance of Slavery in Nantes, has called for Colbert Hall to be renamed.

"The time has come for France to take a new step concerning the question of colonisation and slavery," he told the Ouest France newspaper.

"I am not saying that we dismantle all the statues, for example, but that we affix a plaque recalling who Colbert is and what he did," Mr Ayrault said.

President Emmanuel Macron said earlier this month that France "will forget none of its artworks, it won't take down statues" in the wake of the protests.

"I will be very clear tonight, compatriots: the Republic won't erase any name from its history," he said in a televised address.

Statues have been defaced and toppled across Europe in recent weeks, including in Belgium and the UK.