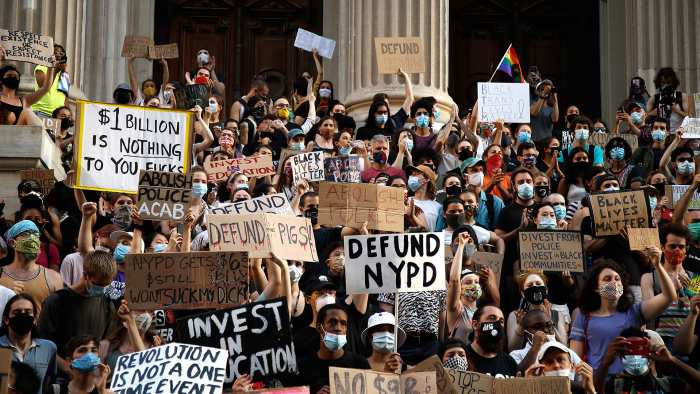 As the protests grew, many people not participating opted to stay home and avoid going out.

There is no evidence yet that the wave of Black Lives Matter protests across the U.S. sparked COVID-19 outbreaks in the more than three weeks since they began, according to a study published Monday by the National Bureau of Economic Research.

Rather, as the protests went on, people who were not participating increasingly stayed at home, possibly counteracting any effects the large gatherings may have had on the spread of the virus, the researchers concluded.

The paper, which was posted online and is not yet peer reviewed, looked at data from 315 cities across the country. Of those, 281 cities had protests and 34 did not.

The coronavirus is spread through close contact, when infected individuals cough, sneeze, talk or shout.

The size of the protests was one factor that researchers thought might contribute to the spread of the virus, the researchers said. They also considered the deployment of tear gas and pepper spray by the police — which can lead to coughing — or whether there were reports of looting and arrests.

Using COVID-19 case counts from the Centers for Disease Control and Prevention and data from SafeGraph, a company that collects anonymous cellphone data to show the movement of populations, the researchers were able to look at not only how cases of COVID-19 were trending in various cities but also how the protests affected the behavior of those who did not participate.

The researchers actually found a relative increase in stay-at-home behaviors by those not attending protests after they began in a city, with people really starting to stay at home by the third day of the protests.

In the paper, the authors suggested that this increase in staying at home may have offset the decrease in social distancing observed by those participating in protests.

"It's certainly possible that there is probably a small increase in cases among the protesting population," Dhaval Dave, an economics professor at Bentley University and one of the authors of the paper, said. But "when we look at the population of the counties as a net, there does not seem to have been significant community spread and no significant increase at all in overall cases at the population level."

"I think that some of us were concerned that there could be a spike in cases," Dr. Carlos Del Rio, chair of the department of global health at Emory University, said. On the other hand, he observed many protests where people were wearing masks and being careful.

Del Rio, who was not involved with the new research, echoed the paper’s conclusions. In Atlanta, he said, "a lot of people were not going anywhere because they were afraid of getting stuck into protests or being stopped by police."

It may be too early to tell if demonstrations have had an impact on the spread of the virus. In an interview with JAMA in early June, Dr. Anthony Fauci, director of the National Institute of Allergy and Infectious Diseases, said that it takes a minimum of three weeks for a behavioral change — such as shifting away from social distancing to large mass gatherings — to cause an increase in infection rates.

Still, cities are optimistic that case counts will not dramatically increase like many feared after the protests began.

“We’ve not seen any evidence that the number of new cases identified in Philadelphia is associated with any protest activities,” the city's Department of Health said in a statement to NBC News. “The daily numbers aren’t dropping as quickly as they have in the past few weeks, which is concerning, but we can’t tie that to protests, other summer activities, or anything else in particular.”

In New York City, health officials have not seen a recent spike in emergency room visits or hospitalizations, according to a statement from Dr. Oxiris Barbot, the city’s health commissioner. Still, she added: "Staying inside is the safest way to prevent the spread of COVID-19. If you do go out, our message is to wear face coverings; be diligent about washing hands; and certainly, when at all possible, maintain 6 feet of distance from your fellow New Yorkers.”