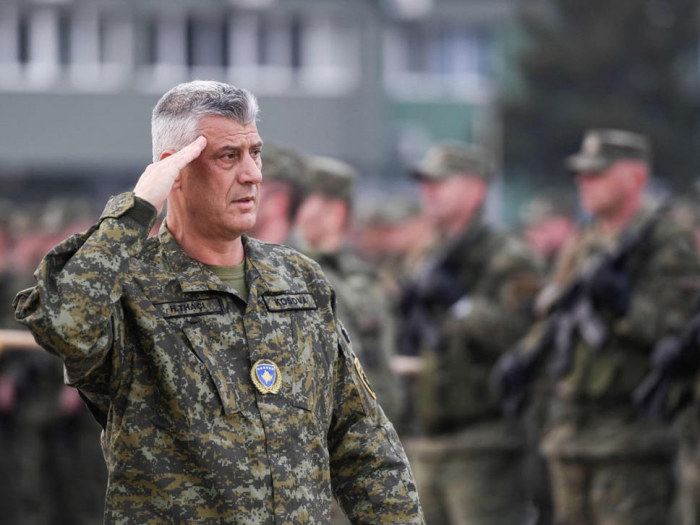 Kosovo’s president has been indicted on a range of crimes against humanity and war crimes charges along with nine other former separatist fighters.

A statement from a prosecutor of the Kosovo Specialist Chambers said Hashim Thaci and the others suspects “are criminally responsible for nearly 100 murders” of political opponents and Kosovar Albanian, Serb and Roma victims.

Other charges include enforced disappearance, persecution and torture.

Mr Thaci commanded fighters in the Kosovo Liberation Army, or KLA, during the country’s 1998-99 independence war with Serbia.

Before the indictment was issued, Mr Thaci planned to attend a White House meeting with Serbia’s leaders on Saturday aimed at securing a peace agreement between Serbia and Kosovo.

The president had already left Kosovo, but pulled out of his trip to Washington following his indictment.

Mr Thaci, 52, was elected president in February 2016 and his term ends next year. He previously served as prime minister, deputy prime minister and foreign minister.

The indicted individuals also include Kadri Veseli, former parliament speaker and leader of the opposition Democratic Party of Kosovo. Mr Thaci resigned as the party’s leader when he became president, leaving the post to Mr Veseli.

The indictment issued on Wednesday was the first by the special tribunal based in The Hague.

The court has been operating since 2015 and has questioned hundreds of witnesses. Kosovo’s prime minister resigned last year before he was questioned. Mr Veseli also has been questioned, but not Mr Thaci.

The indictment is being reviewed by a pretrial judge who will decide whether to confirm the charges, according to the statement.

The prosecutor filed the indictment following a lengthy investigation and it reflects his “determination that it can prove all of the charges beyond a reasonable doubt”, the statement said.

Kosovo politicians resisted and resented the scrutiny of the war crimes court, repeatedly noting that Serb troops committed massacres and other atrocities during the war that went unpunished.