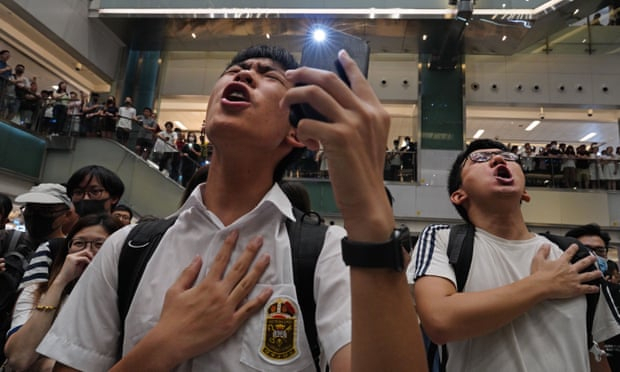 China has continued to tighten its grip on Hong Kong by banning the singing of the unofficial pro-democracy anthem in schools and turning a city centre hotel into the new headquarters of its national security office.

Hong Kong’s education secretary, Kevin Yeung, said on Wednesday that Glory to Hong Kong, a song written last year which grew from the popular street protests in 2019, would be outlawed in schools.

Responding to a question in parliament, Yeung said in a statement that “individuals and groups with ulterior motives have deliberately misled and incited students to express their political stance”, and the department and schools were “obliged” to stop it.

Schools would therefore no longer be allowed to permit students to play, sing or broadcast any songs that would “disrupt the normal operation of schools, affect students’ emotions or contain political messages”.

“For example, the song ‘Glory to Hong Kong’, originated from the social incidents since June last year, contains strong political messages and is closely related to the social and political incidents, violence and illegal incidents that have lasted for months. Therefore, schools must not allow students to play, sing or broadcast it in schools.”

The ban came as China opened the new headquarters of its national security office in the former Metropark hotel in Causeway Bay close to Victoria Park – a city-centre location that has been one of the most popular venues for pro-democracy protests.

The office will oversee the Hong Kong government’s enforcement of the sweeping national security legislation that China imposed on the city last week.

The legislation allows agents to take suspects across the border for trials in Communist party-controlled courts and specifies special privileges for its agents, including that Hong Kong authorities cannot inspect their vehicles.

The newly appointed chief of the office, Zheng Yanxiong, Hong Kong leader Carrie Lam and Luo Huining, the head of China’s liaison office in the city – Beijing’s top representative office – attended the opening ceremony at the former Metropark hotel, which was popular with tourists for its harbour views.

Luo said the office was “the gatekeeper of national security” and people who loved China and Hong Kong welcomed it.

“Those with ulterior motives and who are anti-China and seek to destabilize Hong Kong have not only stigmatized the office, but also smeared the legal system and rule of law in the Chinese mainland in an attempt to stir up unnecessary worries and fears among Hong Kong residents,” Luo said.

Security was tight around the hotel, with tall barriers raised and numerous police on duty nearby.

The law has pushed China’s freest city onto a more authoritarian path and drawn condemnation from some western governments, lawyers and rights groups.

It punishes acts of secession, subversion, terrorism and collusion with foreign forces with up to life in prison. Police have arrested at least 10 people, including a 15-year-old, under it for suspected threats to China’s national security.

Critics fear it will crush coveted freedoms in the Chinese-ruled city, while supporters say it will bring stability after a year of sometimes violent protests that plunged the former British colony into its biggest crisis in decades.

Zheng said the office would enforce the law strictly “without infringing on the legitimate rights and interests of any individual or organisation”.