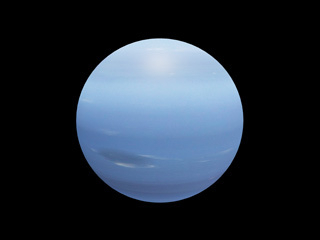 Life isn't always easy for astrophysicists: just when they've figured out another aspect of the patterns of movement in our Solar System, along come two of the moons of Neptune to mess everything up.

The two moons in question are Naiad and Thalassa, both around 100 kilometres or 62 miles wide, which race around their planet in what NASA researchers are calling a "dance of avoidance".

Their strange orbit was first detected by NASA researchers in November 2019.

Compared with Thalassa, Naiad's orbit is tilted by about five degrees – it spends half of its time above Thalassa and half of it below, in a linked orbit that's unlike anything else on record.

"We refer to this repeating pattern as a resonance," said physicist Marina Brozovic, from the NASA Jet Propulsion Laboratory back in 2019.

"There are many different types of dances that planets, moons and asteroids can follow, but this one has never been seen before."

The two small moons' orbits are only around 1,850 kilometres (1,150 miles) apart, but they are perfectly timed and choreographed to keep avoiding each other. Naiad takes seven hours to circle Neptune, while Thalassa takes seven and a half on the outside track.

If you were stationed on Thalassa, you'd see Naiad passing above and below in a pattern that would repeat itself every four loops, as Naiad repeatedly laps its neighbour. The researchers say these manoeuvres keep the orbits stable.

To figure this out, the team used data collected between 1981 and 2016 from telescopes on Earth, Voyager 2, and the Hubble Space Telescope to determine how Naiad and Thalassa are getting around the ice giant they call home.

These moons are two of 14 satellites confirmed for Neptune, and two of the seven so-called inner moons, a very tightly packed system interwoven with faint rings.

According to the researchers, the capture of the great Neptune moon Triton might explain where Naiad and Thalassa originated from, and how they came to be spinning around their planet in such an unusual way.

The inner moons may represent Triton leftovers, the team suggests, with Naiad eventually kicked into its tilted orbit through an interaction with another of these nearby neighbours.

Besides plotting out the orbits of Naiad and Thalassa, the new study has also been able to take the first steps towards determining the composition of Neptune's inner moons, which seem to be made up of something similar to water ice.

"We are always excited to find these co-dependencies between moons," said planetary astronomer Mark Showalter, from the SETI Institute.

"Naiad and Thalassa have probably been locked together in this configuration for a very long time, because it makes their orbits more stable. They maintain the peace by never getting too close."