Erdogan: Hagia Sophia to open for worship on July 24 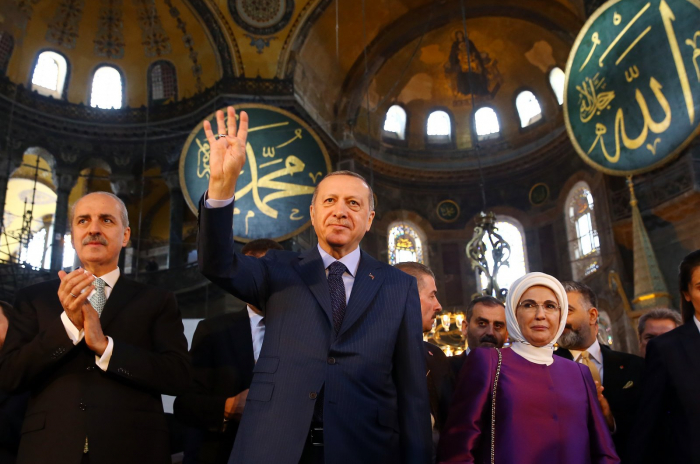 In a speech broadcast live hours after a presidential decree was issued for the reversion of Istanbul's iconic Hagia Sophia from a museum into a mosque, President Recep Tayyip Erdoğan said it will open for worship on July 24, AzVision.az reports citing Daily Sabah.

“As with all other mosques, the doors of Hagia Sophia will be open to all, including Turkish citizens and tourists. We are planning to open Hagia Sophia Mosque for worship on July 24. Hagia Sophia is under Turkish jurisdiction. Any objection to our judiciary's decision will be perceived as a breach of our sovereignty,” Erdoğan said.

Turkey’s top administrative court on Friday annulled the 1934 government decree that turned Hagia Sophia into a museum. The long-awaited ruling has opened the way for Istanbul's iconic Hagia Sophia to be used as a mosque.

Upon the court’s ruling, Erdoğan signed a presidential decree to hand over Hagia Sophia to Turkey's Presidency of Religious Affairs and open for worship while congratulating the Turkish people.

The court stated that Hagia Sophia is officially registered as a mosque in its deed, adding that it was decided its use for anything other than a mosque was legally not possible. "The Cabinet decision in 1934 that ended its use as a mosque and defined it as a museum did not comply with laws," it said.