Hundreds try to storm Serbian parliament as protests heat up 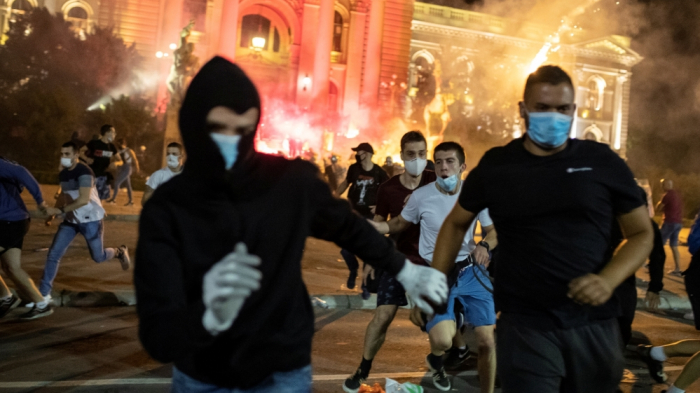 Police fire tear gas as thousands of anti-government protesters rally for a fourth night in Belgrade.

Thousands of Serbs protested for a fourth consecutive night on Friday, rallying against President Aleksander Vucic and his government's handling of the coronavirus pandemic.

Demonstrators - who were defying a ban on mass gatherings amid a spike in virus infections - tried to storm the Serbian parliament in central Belgrade, throwing bottles, rocks and flares at the police guarding the domed building and removing its metal fences.

Police first used their shields to push back the protesters and prevent them from entering the building.

But after repeated attacks, they fired tear gas to disperse the crowd, and then ended up in running battles with demonstrators.

Several people were arrested, and many reporters were injured, mainly in attacks by the demonstrators.

This week's demonstrations were at first driven by frustration over economically stifling measures to contain the pandemic, but soon evolved into anti-government rallies with participants demanding Vucic's resignation.

Earlier on Friday, Vucic said he was not worried about losing political power amid the protests, considered the most intense since the overthrow of former Serbian strongman Slobodan Milosevic in 2000. He instead expressed fear about the spread of the virus by the demonstrators.

"It is so irresponsible to call upon people to gather and demonstrate when we are faced with the most horrific numbers of infections from the coronavirus," Vucic told reporters during a state visit to France.

"I beg people, please, let's keep our health safe. Nobody is going to take power by force. Power is taken at the elections. You can protest as much as you want when the epidemic is over," he said.

Prime Minister Ana Brnabic announced the highest daily number of deaths, 18, on Friday since the start of the pandemic in the Balkan country. She said 386 new confirmed were recorded cases in the past 24 hours. That brings the total to more than 17,300 confirmed cases and 352 deaths since March.

She said "hospitals are packed with sick" and urged people "to respect the measures in place" to restrict the spread of the virus.

Critics say the government's decisions to allow football matches, religious festivities, parties and private gatherings to resume in May and parliamentary elections to go ahead on June 21 are to blame for the new surge in infections. Vucic's Serbian Progressive Party (SNS) largely won the vote.

During his nearly three years in office, Vucic has consolidated a tremendous amount of power in the presidency, a role that previously was only ceremonial.

Friday's unrest came after a peaceful protest on Thursday - though there was also violence earlier this week.

The protests started on Tuesday when the president announced that Belgrade would be placed under a new three-day lockdown following a second wave of confirmed coronavirus infections.

They have continued even though Vucic suspended his plans to enforce the lockdown. Instead, his government has banned gatherings of more than 10 people in the capital.

Serbian officials denounced the protests as an attempt to overthrow the government and weaken Vucic's position in the European Union-mediated negotiations on Kosovo, a former province whose 2008 declaration of independence Belgrade does not recognise.