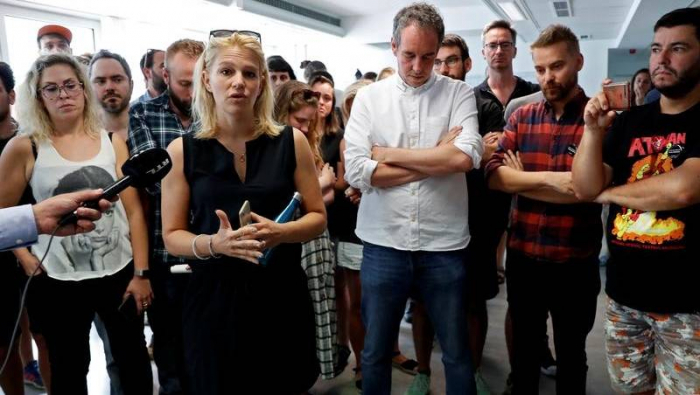 More than 70 journalists and staff at Hungary's top news site Index have resigned, accusing the government of launching a bid to destroy or tame their website.

Index is the last of Hungary's key independent media and editor in chief Szabolcs Dull was fired on Tuesday.

Its journalists said the sacking was "clear interference" and an attempt to apply pressure on the site.

Over the past decade, supporters of nationalist and conservative Prime Minister Viktor Orban have gradually taken control of Hungary's independent media. Hungary is ranked 89th out of 180 countries on the Reporters without Borders World Press Freedom Index.

Demonstrators were planning to march on the prime minister's office.

Only last month, Szabolcs Dull had warned that Index was "under such external pressure that could spell out the end of our editorial staff as we know it". In an alarming piece published on 22 June, he warned that the website's editorial staff were "in danger" and the dial on a "freedom barometer" on the homepage was moved to "in danger".

On Friday, three leading editors and more than 70 others said they were ending their employment there, because board president Laszlo Bodolai had refused to reinstate the chief editor. There were emotional scenes as they proceeded to walk out of the office.

Mr Bodolai rejected claims that the website's independence was at risk, blaming Dull for failing to control tension within the newsroom.

Fears for Index's independence came to a head a few months ago when Miklos Vaszily, a pro-Orban businessman, took a 50% stake in the firm that controls Index's advertising and revenue.

He already ran pro-government broadcaster TV2 and was seen as playing a key role in turning another Hungarian website, Origo, into a pro-Orban outlet.

As the drama unfolded in the Index newsroom on Friday, a photo emerged of Mr Vaszily having lunch with key Orban adviser and historian Maria Schmidt.

What does this mean for Hungary and Orban?

The demise of Index deprives the Hungarian public of the strongest independent voice in the media.

Staff resigned because they had pledged to remain free of political influence - in a country where much of the media simply await orders from the government on what to report, and how to report it.

The newsrooms of public service radio, TV and the state news agency MTI long ago gave up any pretence of impartiality.

Nepszabadsag, the main left-wing paper, ceased publication in 2016, while Origo, another news site , switched to the government side in 2014.

Nearly all regional media are part of the Fidesz media empire. Index reporters have formed a Facebook group to try to continue their work.

At first sight, events at Index look like yet another victory for Viktor Orban. But the man who rose to prominence opposing one-party rule has now re-established one-party rule. By capturing the state - economy, parliament, constitutional court, media - he risks looking ridiculous.

Those critical of his rule may also be forced to rethink the forms of their opposition. Some argue for new, or merged parties. But there is also a growing clamour to boycott parliament and the 2022 elections, to strip Orban of his last claim to democratic legitimacy.

Mr Orban's Fidesz-led government has repeatedly clashed with the European Union about rule of law, and the party was suspended by the European Parliament's centre-right EPP grouping because of its immigration policies.

Earlier this week, Mr Orban said Hungary and Poland had won a "huge victory" against EU countries trying to link rule of law guarantees to a new budget and package of Covid-19 recovery loans and grants.

But the head of the European Council, Charles Michel, was adamant that the deal agreed on Monday was "the first time that the respect for rule of law is a decisive criteria for budget spending".