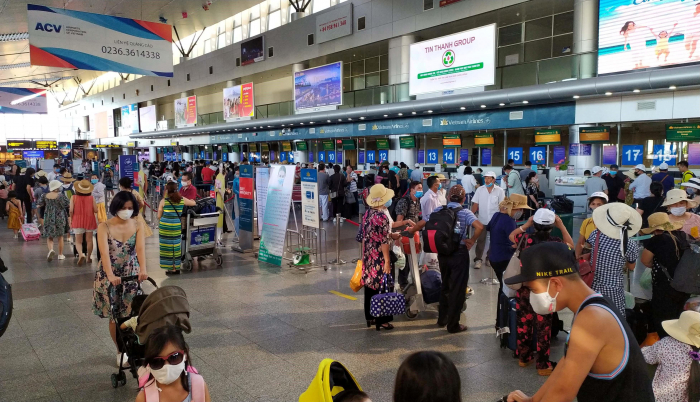 The airport in the central Vietnamese tourism hotspot of Danang was packed on Monday after three residents tested positive for the coronavirus and the evacuation of 80,000 people began.

The Southeast Asian country is back on high alert after authorities on Saturday confirmed the first community infections since April, and another three cases on Sunday, all in or around Danang.

A further 11 cases linked to a Danang hospital were reported late on Monday.

Nguyen Tien Nam, an English teacher based in Ho Chi Minh City, said he had got on the last flight out of Danang on Sunday night.

“Everyone was just trying to get out of the city on Sunday,” said Nam. “Everyone was telling me that I should get out as soon as possible.”

By imposing strict quarantine measures and carrying out an aggressive testing programme during the pandemic, Vietnam has kept its tally of reported infections to 431, with no deaths.

Vietnam is still closed to foreign tourism, but there had been a surge in domestic travellers looking to take advantage of discounted flights and holiday packages to local resorts.

Those returning from Danang to other parts of the country would have to quarantine at home for 14 days, the health ministry said.

Genome analysis by scientists showed that the strain of the coronavirus found in Danang had not previously been detected in the country, Vietnam’s health minister said, according to state broadcaster VTV.

The strain, which had been found in Bangladesh, Britain and Ireland, appeared to be more contagious than other strains detected in Vietnam, VTV said.

State media on Sunday said police in Danang had arrested a 42-year-old Chinese man it said was the head of a criminal group which helps people illegally enter Vietnam from China.

Authorities have not officially linked the new cases in Danang to illegal immigration.

The government said that authorities in Ha Giang province, which borders China, had caught more than 1,500 people illegally crossing into the province since May.

Most of those caught were Vietnamese citizens, the government said, and had since been quarantined.