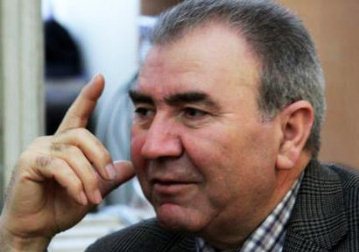 The letter of the Chairman of National Council Rustam Ibrahimbayov was read out at the structure`s extraordinary session on Friday. In his letter Rustam Ibrahimbayov called to support the candidacy of Jamil Hasanli as the alternative single candidate in presidential elections.
As a result of voting Hasanli was elected the alternative single candidate from the National Council.

Azerbaijani opposition submitted the documents to CEC for registration of its single candidate Rustam Ibrahimbayov as presidential candidate the day before. However, he has a dual citizenship (Azerbaijan and Russia), which contradicts with the legislation. As a result, a decision on nominating alternative candidate was adopted.

The requirement on the absence of dual citizenship is the requirement of Azerbaijan`s Constitution, the head of CEC Mazahir Panahov told journalist on Friday.

"[...] citizen with dual citizenship and obligations to other countries cannot be the president of Azerbaijan. In other words, this is the requirement of Azerbaijan`s Constitution. Therefore, these issues should be viewed within the conditions allowed by the legislation," Panahov said.

Azerbaijani citizens who have the voting right (active or passive), initiative group of voters, political parties, blocks of political parties have the right to nominate the candidacy for participation in the presidential elections.

Earlier, the CEC decided to hold presidential election on October 9.

The presidential elections in Azerbaijan are held every five years.