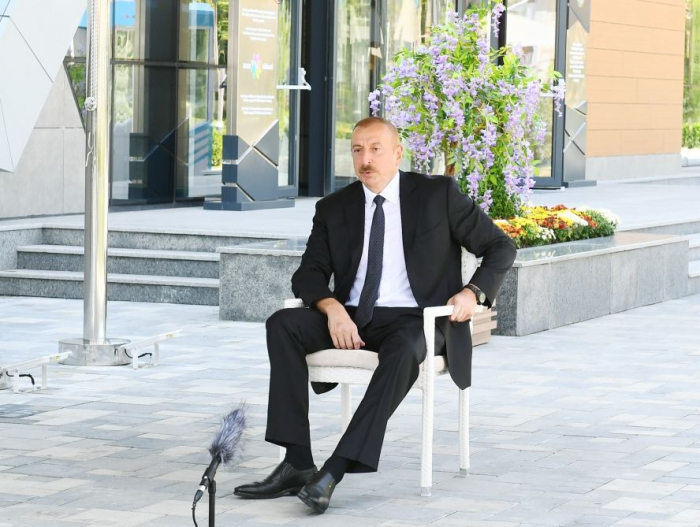 President of the Republic of Azerbaijan Ilham Aliyev made remarks at the opening of a regional office of "ASAN Service" center in Balakan, AzVision.az reports.

The Prime Minister of Armenia says that "Nagorno-Karabakh is Armenia." What kind of negotiation we can conduct after this statement? The main essence of the talks is to liberate the occupied territories. We need to negotiate on this. We have never negotiated the granting of independence to the so-called "Nagorno-Karabakh Republic", never! This has never been the subject of negotiations. I have never talked about it at all and I have no intention to talk. We are negotiating around it when and in what order the occupied territories will be liberated. If the Armenian Prime Minister says that "Nagorno-Karabakh is Armenia", if he says that "we want to negotiate with the so-called" Nagorno-Karabakh Republic ", then he destroys the talks. I put one condition in front of 7 conditions, one condition - the Armenian armed forces must be withdrawn from all occupied lands, the territorial integrity of Azerbaijan must be restored, the citizens of Azerbaijan must return to their native lands! This is my condition and I üould recommend them to accept it", the Head of State said

The head of state stressed that we will return to our native lands and establish "ASAN service" centres in our occupied territories. Young people will work in these centers. We will restore our historical and religious monuments destroyed by Armenian vandals and live in our own land. We have no eyes on the lands of other countries, and we do not give our land to anyone.