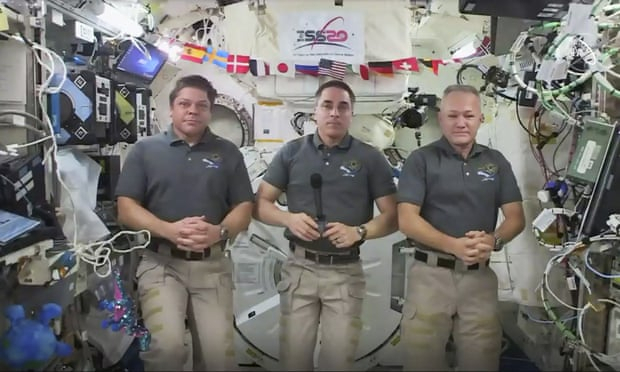 Two Nasa astronauts will make the first splashdown return to Earth in 45 years despite the threat posed by Hurricane Isaias off the coast of Florida.

Robert Behnken and Douglas Hurley are set to come back to Earth from the International Space Station on Sunday after launching into space in May on a commercial spacecraft built by SpaceX.

The pair are scheduled to undock from the space station at around 11.30pm GMT on Sunday (7:30pm ET), and travel in SpaceX’s astronaut carrier, the Crew Dragon, before splashdown at 2:42 pm ET (6:42pm UK GMT).

Nasa said it will continue to monitor Hurricane Isaias as it edges close to south Florida over the weekend.

Behnken told reporters during a press conference on Friday: “We won’t leave the space station without some good landing opportunities in front of us, good splashdown weather.”

The last time astronauts made an ocean landing was on July 1975 during an Apollo mission.

Since then, spacemen have always landed on terra firma, using Nasa’s SpaceShuttle or the Russian space agency’s Soyuz capsules.

If all goes to plan, the splashdown will usher in a new era for Nasa, which will have at least one commercial spacecraft ready to launch astronauts into space from US soil.

The splashdown is the final step in the mission designed to test SpaceX’s human spaceflight system – including launch, docking, splashdown, and recovery operations.

In a post-launch conference back in May, Elon Musk – who is the founder of SpaceX – said was was not keen to “declare victory yet”, emphasising that the “return can be more dangerous than the ascent”.

Musk said at that time: “We need to bring them home safely and make sure that we are doing everything we can to minimise that risk of reentry.”

Shortly after undocking, the Crew Dragon perform will perform several manoeuvres that will lower the capsule’s orbit and get it closer to the splashdown zone.

The spacecraft will then perform another manoeuvre, known as deorbit burn, which will place the it on a trajectory for splashdown, travelling at a speed of approximately 17,500 miles per hour.

On entering the Earth’s atmosphere, the Crew Dragon will face scorching temperatures of around 1,900C as it deploys parachutes to slow its speed down to around 119 miles per hour, before landing on the ocean.

The re-entry will create a communications blackout between the spacecraft and Earth that is expected to last approximately six minutes, Nasa said.

Two SpaceX recovery ships, the Go Searcher and the Go Navigator, made up of spacecraft engineers, recovery experts and medical professionals, will be waiting to pull the capsule on board and help the astronauts get out as they begin readjusting to gravity.

The aerospace company’s first operational flight is expected to take place in September, when a second Crew Dragon spacecraft will carry four astronauts to the space station.