How to create warning about nuclear danger for far future 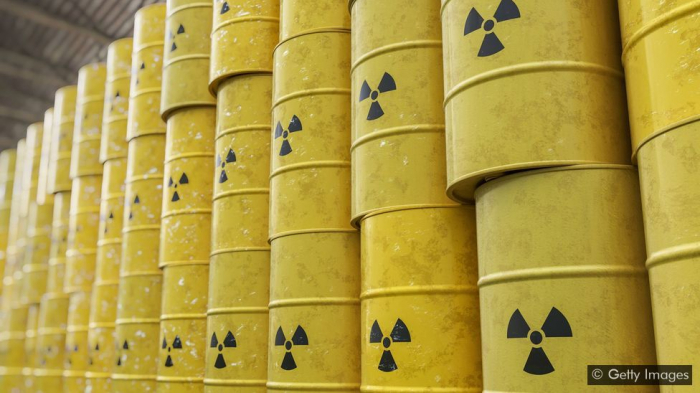 The nuclear waste buried far beneath the earth will be toxic for thousands of years. How do you build a warning now that can be understood in the far future?

“This place is not a place of honor,” reads the text. “No highly esteemed dead is commemorated here… nothing valued is here. What is here was dangerous and repulsive to us. This message is a warning about danger.”

It sounds like the kind of curse that you half-expect to find at the entrance to an ancient burial mound. But this message is intended to help mark the site of the Waste Isolation Pilot Project (WIPP) that has been built over 2,000 feet (610m) down through stable rocks beneath the desert of New Mexico. The huge complex of tunnels and caverns is designed to contain the US military’s most dangerous nuclear waste.

This waste will remain lethal longer than the 300,000 years Homo sapiens has walked across the surface of the planet. WIPP is currently the only licensed deep geological disposal repository in operation in the world. A similar facility should also open in Finland in the mid-2020s.

When the facility is full sometime in the next 10 to 20 years, the caverns will be collapsed and sealed with concrete and soil. The sprawling complex of buildings that currently mark the site will be erased. In its place will be “our society’s largest conscious attempt to communicate across the abyss of deep time”.

The plan calls for huge 25ft (7.6m) tall granite columns marking the four-sq-mile (10 sq km) outer boundary of the entire site. Inside this perimeter, there is an earth berm 33ft (10m) tall and 100ft (30m) wide marking the repository’s actual footprint. Then inside the berm will be another square of granite columns.

At the centre of this monumental “Do Not Enter” sign will be a room containing information about the site. In case the information becomes unreadable, there will be another buried 20ft below, and another buried in the earth barrier itself. Detailed information about the WIPP will be stored in many archives around the world on special paper stamped with the instruction that it must be kept for 10,000 years, the rather arbitrary length of the site’s license.

Welcome to the world of nuclear semiotics. The vast landscape proposed for the WIPP is partly influenced by science fiction. Nuclear physicists, engineers, anthropologists, sci-fi writers, artists and others have come together in the very broad, esoteric field of research into the way that future humans – and anything that comes after us – might be warned of our deadly legacy

Sadly, the idea to cover the site with a forest of massive concrete thorns was not taken up, nor the idea to create a self-perpetuating atomic priesthood who would use legend and ritual to create a sense of fear around the site for generations. Linguist Thomas Sebok first used the phrase “nuclear priesthood” in 1981. Neither was the idea of breeding cats that would change colour when exposed to radiation and – it was hoped – give birth to the idea of the ‘ray cat’, the feline Geiger counter, which would over the millennia teach humans to run if their cats change colour. Ironically, there is now Ray Cat movement with its own t-shirts, songs, and documentary.

The bright, modern meeting room in rural Oxfordshire feels a long way from the desert of New Mexico and talk of atomic priesthoods, but it is closer than it appears. The former World War II airfield at Culham is home to the UK’s Atomic Energy Authority and to the Culham Centre for Fusion Energy (CCFE), the UK’s nuclear fusion laboratory. Then the first nuclear reactor in Western Europe, which began operating just down the road at Harwell on another former airfield in 1947. Here also lies the HQ of the UK’s Radioactive Waste Management Ltd (RWM).

Sitting on the other side of the table from me are two of the people whose job it is to think about this rather big problem. Professor Cherry Tweed is the chief scientific adviser to RWM, and subject matter expert James Pearson is at the same company; it is their job to consider the options for marking the UK’s own repository, a facility that will take 200 years to plan, construct, fill up and seal. Like similar bodies around the world, the RWM has an obligation to consider the options for marking any proposed site.

On the video screen above us is a picture of the huge prehistoric mound Silbury Hill, near Stonehenge. “It is 340,000 cubic metres. It is more than 4,000 years old,” says Pearson. “Its use is highly debated, but essentially unknown. Is it an ancient marker? Can we do better? Should we even try?”

The Human Interference Task Force was set up in 1981 to answer precisely these questions for the proposed Yucca Mountain repository near Las Vegas, Nevada. The task force is widely credited with creating the field of nuclear semiotics. Today the Paris-based Nuclear Energy Agency (NEA) carries on the work of the now defunct task force’s through its initiative on the Preservation of Records, Knowledge and Memory Across Generations (RK&M Initiative) which began work in 2011 and whose final report was published in 2019.The NEA is an intergovernmental agency which encourages cooperation among the 33 countries with advanced nuclear technology infrastructure.

“The role of the RK&M is to investigate the effective means to reduce the likelihood of inadvertent human intrusion into geological disposal repositories,” says Dr Gloria Kwong, formerly deputy head for radioactive waste management, NEA, and now Head of IFNEC Technical Secretariat at OECD Nuclear Energy Agency, “as well as to enhance capabilities of future societies in making informed decisions.

The initiative came up with a number of suggestions as how to help humans in the future make informed decisions, such as libraries, time capsules and physical markers. “The physical markers can be a single object like an obelisk, or many, like a field of spikes, on the site or which point to the site,” says Dr Ele Carpenter, convenor of the Nuclear Culture Research Group and Reader in Curating at Goldsmiths, University of London. “It may even be better not to have one monolith that might get knocked down, but to have thousands of little markers buried in the ground to be discovered later. They can even use distributed artefacts like Roman coins.”

Cécile Massart thinks that for signs to be future-proofed they need to be part of ‘a nuclear culture’
It’s a tough job even in human time, let alone deep time. A study by the International Atomic Energy Agency found that even today, as little as 6% of the world’s population may recognise the trefoil, the three black blades on a yellow background that is the symbol for radiation.

Another study found that the meaning of the 1,000-year Tsunami Stones in north east Japan is still understood. The problem is that some locals chose to ignore the warnings and build in areas vulnerable to Tsunami. They paid a terrible price in the 2011 earthquake and Tsunami.

Brussels based artist and researcher Cécile Massart thinks that for signs to be future-proofed they need to be part of “a nuclear culture, with its own monuments, markers, and rituals. At the moment there is only really the radioactive symbol.”

In her work Laboratories, Massart imagines a creative lab housed in a series of metal cones and domes built above the waste repository. “It would bring together musicians, archaeologists, writers, economists, artists, biologists and poets of each new generation to work on the markers needed to transmit the memory to the next,” she says.

In 2011 US artist Bryan McGovern Wilson and Robert Williams, professor of fine art at the University of Cumbria went further. “In Cumbrian Alchemy, we explored the power of Atomic folk objects, costumes, objects and rituals intended to create an oral tradition around the sites on Cumbria’s nuclear coast so that they will never be forgotten,” says Williams by, for example, imagining how the vestments of an Atomic Priest might be inspired by the clothes worn by Robert Oppenheimer, father of the atomic bomb. The Priest was then photographed at archaeological sites in Cumbria to test their – and Seboek’s – ideas.

“It is easy for the artist to be seen as disruptor by the nuclear industry,” Massart says, “but some engineers, directors, enlightened and cultured leaders have now recognised the value of art.”

You don’t have to try to scare people away by looking menacing and symbolising danger – James Pearson
The industry discussion is often about a specific site,” argues Carpenter, “but what we’re interested in as artists is much more of a holistic global view of what the nuclear industry is. Rather than looking at one part of it, look at the whole process and then have a whole system of markers.”

In the end, the RK&M Initiative came up with the idea that systems are the solution. “No one can say that this is the magic site,” says James Pearson, who worked on the initiative. “The most successful approach would have a number of systems that complement each other, such as a combination of physical markers with information about the site stored in numerous archives. It means that you have defence in depth. If one archive isn’t maintained or there’s a fire, then you have backups.”

It is also about trying to integrate the facilities into future societies rather than scaring people away.

“You don’t have to try to scare people away by looking menacing and symbolising danger like what’s currently planned for the WIPP. You need try to inform people of what’s there, so they can then make an informed decision for themselves.”