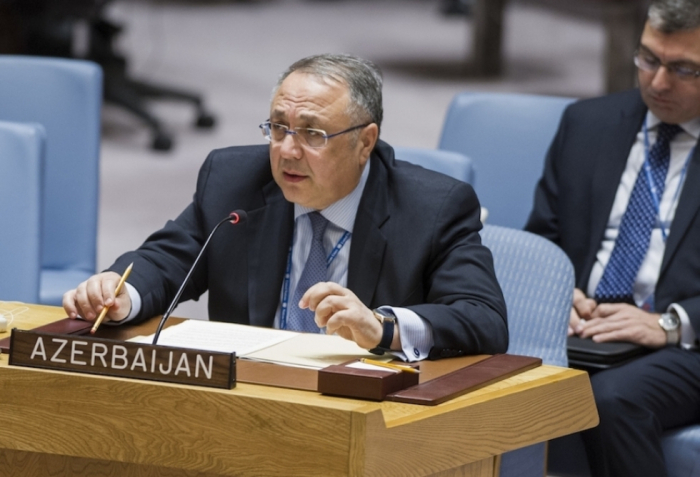 "On 12 July 2020, the armed forces of Armenia, in blatant violation of international law, launched a cross-border attack against Azerbaijan in the Tovuz district, with the use of artillery and mortars. The attacks continued on the following days, directly targeting also the adjacent densely populated areas in the Aghdam, Dongar Qushchu and Alibeyli villages of the Tovuz district of Azerbaijan. As a result, a 76-year-old resident of the Aghdam village, Aziz Azizov, and 12 officers and soldiers of the armed forces of Azerbaijan were killed, and many were wounded. Serious damage was inflicted upon the civilian facilities in the area.

It is notable that Armenia launched the attacks across the international border, far away from the Nagorno-Karabakh region and other occupied territories of Azerbaijan. The objective of this deliberate action was to expand aggression and gain control over the heights in the territory of Azerbaijan that would enable the armed forces of Armenia to keep the surrounding Azerbaijani localities and the strategic oil and gas pipelines, including the Southern Gas Corridor, and the Baku-Tbilisi-Kars railway, situated near the area of military escalation (15–25 km and 10–12 km, respectively), under constant surveillance and threat.

By launching a cross-border attack, Armenia attempted also to introduce a new dimension into the unresolved Armenia–Azerbaijan conflict by involving the military-political alliance of which it is a member. Apart from that, with this act of aggression, the Armenian leadership tried to divert the attention of the public from the evolving deep economic, financial and political crisis that the country is facing, exacerbated by the coronavirus disease (COVID-19) pandemic.

Armenia’s attacks followed the pattern of inflammatory statements and actions by its leadership against the sovereignty and territorial integrity of Azerbaijan. It may suffice here to recall some of them, which speak for themselves as graphic examples of the consistency of that Member State’s policy of aggression.

Back in 2013, in response to the question whether the Armenian armed forces could strike first, the then Defence Minister of Armenia, Seyran Ohanyan, said: “I don’t exclude anything because the doctrine of using our armed forces for the country’s defense envisages numerous measures that can be not only defensive but also preemptive.”

In his interview of August 2014, the then President of Armenia, Serzh Sargsyan, threatened to unleash short-range ballistic missiles against major cities in Azerbaijan by saying that “the Azerbaijani leadership knows very well what resources the Armenian armed forces have in stock. They are very well aware that we have ballistic missiles with an effective range of over 300 km, and that they are capable of turning into ruins any flourishing settlement in a glimpse, like the ruins of Aghdam”.

At a news conference on 24 July 2018, the Deputy Chief of General Staff of Armenia, Lieutenant General Levon Mnatsakanyan, who was in charge of the Armenian occupying forces, threatened Azerbaijan with missile strikes against civilian infrastructure: “That is definitely part of our tactical plans. In general, the art of warfare requires strikes on these facilities as well as military targets in case of a resumption of hostilities, which will damage the [enemy] economy and won’t allow appropriate supplies to the armed forces. I see no need for that yet … But if there is a need to strike [those targets] we will not hesitate for a second.”

On 30 March 2019, the Minister of Defence of Armenia, Davit Tonoyan, stated: “As the minister of defense, I announce that this format, territories for peace, I have re-phrased it. We are doing the opposite – a new war for new territories.” He further added: “We will rid of this trench condition, the constant defense state, and will add the units which may shift the military actions to the territory of the enemy.”

The 12 July attack broke out two days after Armenia had adopted its new National Security Strategy, which reiterated its policy of aggression and annexation."