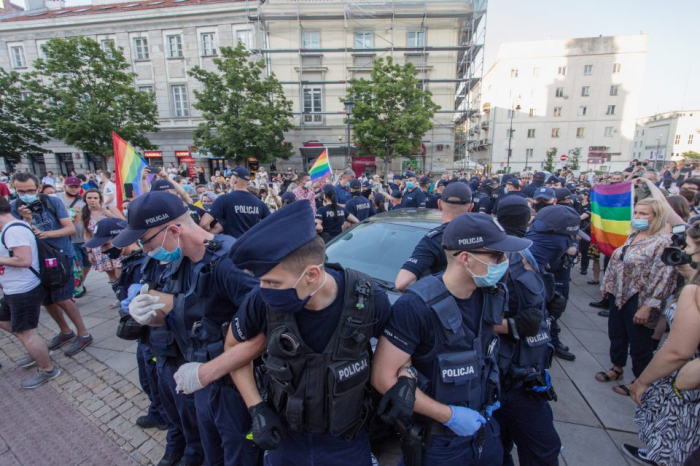 Police said they detained 48 people after protesters tried to stop them arresting an LGBT activist accused of hanging rainbow flags over statues in Warsaw and damaging a pro-life campaigner’s van.

Crowds of protesters shouting “Shame, disgrace!” surrounded a police vehicle in the centre of the capital on Friday to try and stop it driving away with the activist inside.

“Due to yesterday’s active gathering, 48 people were detained,” the Warsaw police force said on its Twitter account on Saturday.

Members of the anti-homophobia group “Stop Bzdurom” have said they hung flag on statues of Jesus and other figures last week as part of a fight for LGBT rights, an issue thrust into the heart of public debate in Poland during last month’s presidential election.

The ruling nationalist Law and Justice (PiS) party has said LGBT rights are part of what it calls an invasive foreign ideology that undermines Polish values and the traditional family.

Government spokesman Piotr Muller said he would not comment on police actions.

Stop Bzdurom and other groups have called for a protest in Warsaw on Saturday in solidarity with LGBT people.