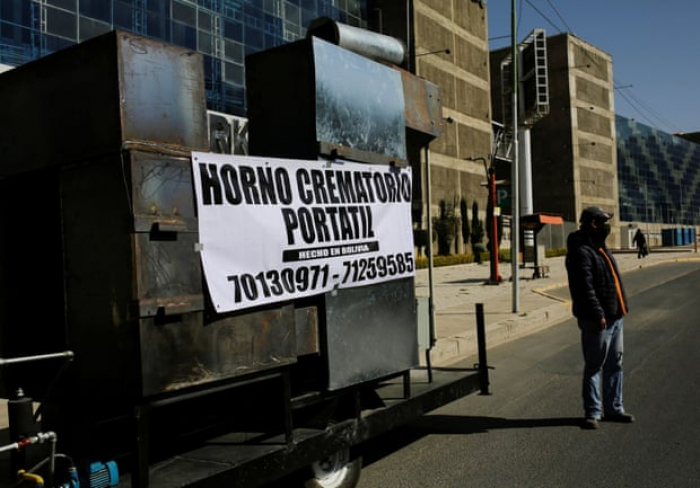 As surging Covid-19 cases across Latin America leave cemeteries and funeral homes struggling to keep pace, engineers in Bolivia have come up with a solution as pragmatic as it is macabre: a mobile crematorium, AzVision.az reports citing the Guardian.

The five-metre by two-and-half-metre oven is small enough to fit on to a trailer, and is powered by locally produced liquefied petroleum gas – making it a cheap option for families who cannot afford a funeral service.

Three canisters of LPG can cremate a body in 30 to 40 minutes, said the mobile crematory’s inventor, Carlos Ayo, an environmental engineer who says he designed the device to help his country in a time of crisis.

“We wanted to help in this pandemic, and one possibility was showing others how to make a crematory oven,” said Ayo in a telephone interview.

“Then we asked ourselves wouldn’t it be better if it could be mobile, to move it from one place to another?”

Ayo said he had received orders from several local councils in Bolivia, where authorities are struggling to deal with the rising death toll. Crematoriums are only found in the country’s main cities, and even then, many Bolivians cannot afford the fees.

A cremation with the mobile crematory would cost about 280 Bolivianos (£30), said Ayo, a fraction of the price charged by established crematoriums which can charge up to $1,000 (£764).

With each cremation lasting around 40 minutes, the mobile crematory could cremate up to 20 bodies a day, he estimated.

Bolivia is one of the poorest countries in South America, and as the coronavirus caseload mounted, its precarious health service and its funerary infrastructure quickly crumpled .

In some towns, families reportedly kept coffins in their homes for days, and bodies were left in the streets. Faced with sheer number of corpses, the health ministry enacted a law which allowed bodies to be buried, even though biosecurity protocols stipulate suspected Covid-19 victims should be cremated.

Martín Fabri, business manager for the mayor’s office in La Paz, said the city’s main cemetery had carried out more than 2,000 burials and cremations in July, compared with a normal monthly figure of about 500.

“We’ve been receiving 80 bodies a day – before it was 10 to 12 bodies a day,” Fabri said. Only half the corpses were marked as suspected or certified Covid-19 cases, but he believes coronavirus was the cause of death in most cases.

“There is no other explanation for the increase.”

Fabri said the mobile crematorium option was being considered by the mayor’s office.

“They could be useful as long as they comply with the quality, security and environmental standards,” said Fabri.