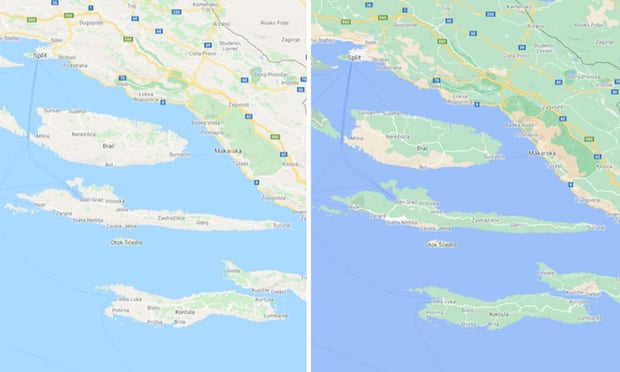 Google Maps gets a visual overhaul worldwide, finally letting users distinguish forest from floodplain, and desert from snowfield, at a glance, the Guardian reports.

Alongside the changes to natural environments, a new set of maps will be rolling out in major cities, beginning with London, New York City and San Francisco, aiming to more accurately represent the built-up environment to help pedestrians and cyclists navigate.

“Google Maps has high-definition satellite imagery for over 98% of the world’s population,” said Sujoy Banerjee, a product manager for the app. “With a new colour-mapping algorithmic technique, we’re able to take this imagery and translate it into an even more comprehensive, vibrant map of an area at global scale.

“Exploring a place gives you a look at its natural features – so you can easily distinguish tan, arid beaches and deserts from blue lakes, rivers, oceans and ravines. You can know at a glance how lush and green a place is with vegetation, and even see if there are snow caps on the peaks of mountaintops.”

The new detail comes from algorithmic analysis of satellite imagery, which attempts to automatically discern the nature of the environment. It then adds new colour on to the map in an attempt to reflect the varieties of landscape.

Rather than following a predefined key, as with a paper map, the automatic colouring allows for different features to be emphasised according to need. In Iceland, the land can be darker green depending on the level of tree cover, but in Washington State, a darker green is instead used to detail the borders of Mt Rainer national park.

Those changes are due to roll out “starting this week”, Google says.

Those updates will include visual representations of features such as pavements, road widths and pedestrian crossings and islands. That, Banerjee says, is “crucial information if you have accessibility needs, like wheelchair or stroller requirements. These details are particularly helpful as more people are opting to walk or take other forms of solo transportation due to the pandemic.”

Google’s rival Apple is in the process of overhauling its own mapping service, introducing a Street View-like feature dubbed “look around” and improving the detail of rural and urban areas.

Apple’s refreshed maps, which were first launched in California’s Bay Area in 2018, will finally hit the UK, Ireland and Canada this autumn, after expanding to Japan, the first non-US deployment, earlier this year.

A few American and Chinese cities will also receive cycling directions in Apple’s update, more than 10 years after Google introduced the feature.

Competition between rival mapping companies has been steadily intensifying, as Google and Apple seek to reposition their respective mapping apps as more fully-featured “local search” offerings. As well as taking users from A to B, Google Maps can now be used to book restaurants or hotels, hire cabs and place orders for takeaway or delivery meals.

But new entrants in the field are limited by technological and financial barriers. Acquiring and processing high-resolution satellite imagery is expensive and technically challenging, leaving few independent companies active in the space after waves of consolidation.