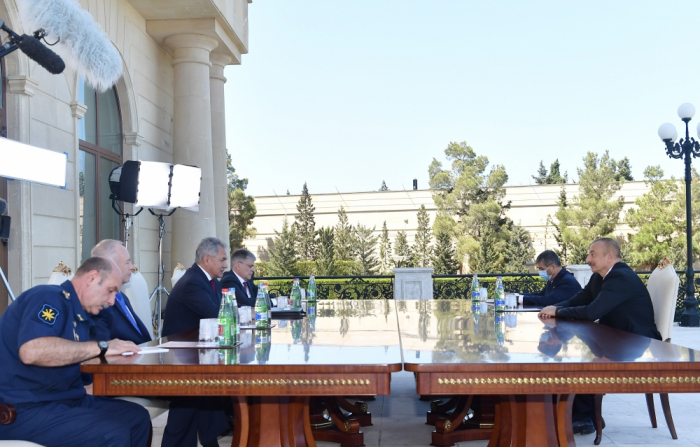 President of the Republic of Azerbaijan Ilham Aliyev has received a delegation led by Minister of Defense of the Russian Federation Sergei Shoigu, AzVision.az reports citing AzerTag.

As reported earlier, President of the Republic of Azerbaijan Ilham Aliyev has today received a delegation led by Russian Defense Minister Sergei Shoigu.

Here are some excerpts from the speeches of President Ilham Aliyev and Defense Minister Sergei Shoigu at the meeting.

President Ilham Aliyev: “The Sea Cup, which is a part of the Army Games, is opening in Baku today. As you know, Azerbaijan traditionally participates in the Army Games and traditionally hosts the Sea Cup. I think that this competition will continue to serve to strengthen cooperation between all participating countries.”

“Our tank troops are taking part in tank biathlon. This is a good opportunity to meet and exchange views on the prospects of our military cooperation.”

“I recently had a telephone conversation with Russian President Vladimir Vladimirovich Putin. During the conversation, we discussed issues related to regional security and regional problems.”

Defense Minister Sergei Shoigu: “For me, a visit to Azerbaijan is always a good opportunity to exchange views and discuss regional security issues, as well as issues related to our military and military-technical cooperation. There are issues to be discussed and reported to the presidents.”

“We cannot but rejoice in the fact that Azerbaijan and its team traditionally host competitions in the Caspian Sea. These competitions are always held at a high level because the traditional hospitality here and the organization of these competitions, of course, are at the highest level.”