YouTube removed more videos than ever during the lockdown period, the company says.The second quarter of the year saw more than 11 million videos taken down, up from six million at the start of the year.

YouTube said that it had opted for "over-enforcement" in its automatic systems when it was short-staffed during lockdown.

But that also meant that more videos were taken down in error.

Normally, "harmful content" would be sent to human reviewers, it said, but due to Covid-19 there were fewer reviewers working.

"One option was to dial back our technology and limit our enforcement to only what could be handled with our diminished review capacity," the company said in a blog post.

The other option was "to cast a wider net so that the most content that could potentially harm the community would be quickly removed" - and it chose to go down that path.

The downside, however, was that some videos that did not violate policies were mistakenly removed by the system.

The result was not unexpected - YouTube had said in March that creators "may see increased video removals".

Normally, it only reinstates about 25% of videos that were taken down automatically following a human review. That had now jumped to 50% of videos being reinstated on appeal, it said.

YouTube also put in place stricter automatic rules in areas such as "violent extremism" and "child safety" - leading to a three-fold increase in video removals.

Child safety overtook spam as the top reason for removal as a result. 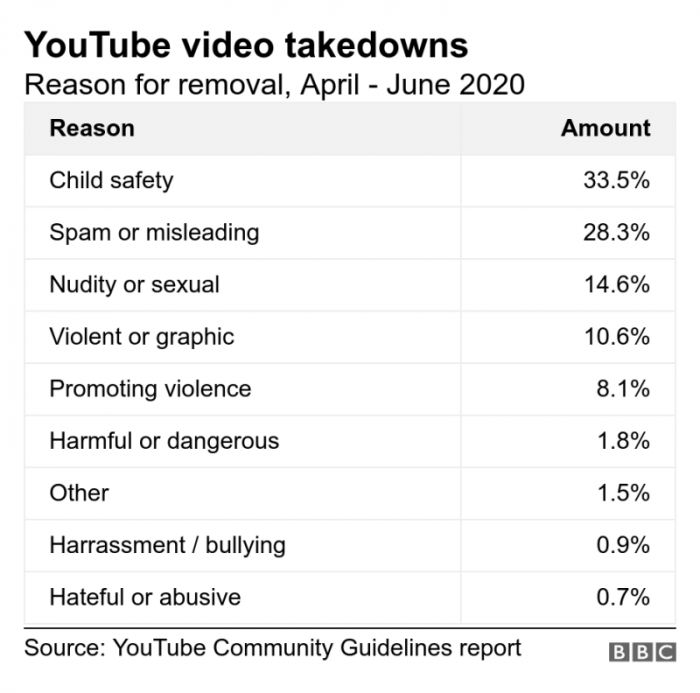 YouTube relies on its automated features to do almost all of its initial takedowns. Between April and June, 10,849,634 videos were first detected by the automated system - compared with 382,499 by ordinary users.

The rest came from a mix of "trusted flaggers", NGOs and government agencies. Human users actually flagged many more videos - more than 15.5 million in the relevant period - but only a small percentage of those were eventually taken down.

And three-quarters of the videos taken down had 10 views or less.

The company also removed nearly two million entire channels in the three-month period - not a significant increase on the previous quarter. More than 90% of those were for spam, scams or being misleading.