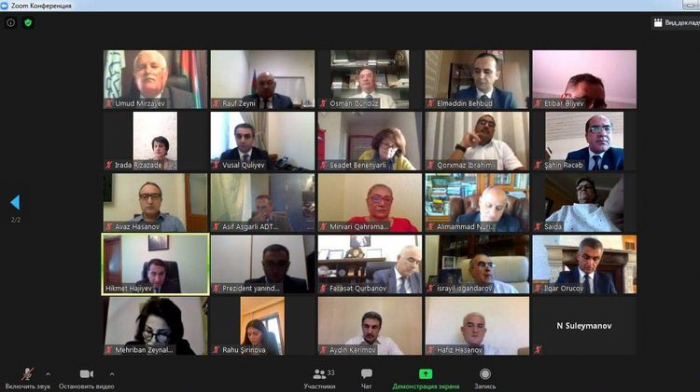 Assistant to the President of Azerbaijan and Head of the Department of Foreign Policy Affairs of the Presidential Administration of Azerbaijan, Hikmat Hajiyev held an online meeting with the members of "Public Leaders Platform" that includes the heads of the active local Non-Governmental Organisations, AzVision.az reports.

The Chairman of the Council of State Support to Non-Governmental Organizations under the President of Azerbaijan Azay Guliyev opened the meeting with the gratitude to Hikmet Hajiyev for the meeting with the heads of the NGOs and expressed his confidence that this initiative will take the NGO-Government relations to the next level which would give impetus to the solution of priority issues for the NGO sector.

Hikmet Hajiyev highlighted President Ilham Aliyev's special attention to the activities of NGOs and strengthening public control mechanisms in our society. Hajiyev also emphasized the active participation of the NGO sector in the public life of the country, stating that the government is interested in expanding the dialogue with NGOs and discussing the issues of concern. He touched the significant role of civil society institutions in the sustainable socio-economic development of the country, strengthening patriotism, protection of national interests, as well as in education, humanitarian and other areas of public importance.

Speaking at the end of the meeting, Hikmet Hajiyev said that the opinions and proposals stated by the NGOs will be carefully reviewed and appropriate measures will be taken to address them.

Note that, Hikmet Hajiyev will continue to meet with NGOs.