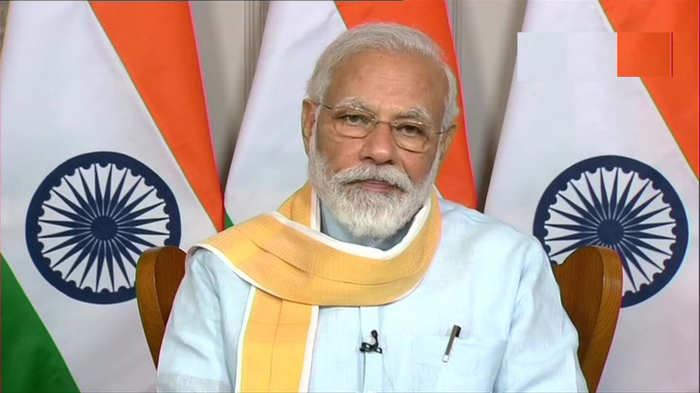 Stressing on the need to become Atmanirbhar in Defence Manufacturing, the Prime Minister said our aim is to boost defence production, develop new technology and give significant roles to private players in the defence sector.

Complimenting Defence Minister Shri Rajnath Singh and his entire team for working on a mission mode and taking relentless efforts, the Prime Minister said that the objective of achieving self-reliance in defense production will definitely gain momentum from today’s seminar.

The Prime Minister said when India became independent, it had a great potential and ecosystem for defense production in India but for decades no serious efforts were made. The Prime Minister remarked that the situation is now changing, continuous and persistent efforts are being undertaken to bring about reforms in the defence sector. He enumerated several concrete steps undertaken in this direction such as improvement in licensing process, creating level playing field, simplification of export process.

PM remarked that a sense of confidence in the defense sector is essential for building a modern and self-reliant India. Decisions such as appointment of CDS, which were pending for decades have been taken now, which reflects confidence of New India. Appointment of Chief of Defence Staff has resulted in better synergy and coordination among the three forces, and has helped in the scaling up of defence procurement. Similarly, he highlighted that opening of defence sector by permitting 74% FDI via automatic route reflects the confidence of new India.

The PM said steps such as earmarking a part of the capital budget for domestic procurement, 101 items for domestic procurement will encourage and give a fillip to domestic defence industries. He also said that the Government is working on speeding up the procurement process, streamlining the system of testing etc. Speaking about Corporatization of Ordnance factories, PM said once completed it will strengthen both the workers and the Defence sector.

Emphasizing on the need for technology up-gradation for self-sufficiency in modern equipment, the Prime Minister said that in addition to DRDO, Government is encouraging Research and Innovation in the private sector and in academic institutions as well. The Prime Minister mentioned that emphasis is on co-production through joint ventures with foreign partners.

Highlighting that the Government has been working on the mantra of Reform, Perform, and Transform, the Prime Minister said major reforms are underway in areas of Intellectual Property, Taxation, Insolvency and Bankruptcy, Space and Atomic Energy.

On the infrastructure initiatives, the Prime Minister spoke about two defence corridors underway in Uttar Pradesh and Tamil Nadu. He said the state of the art infrastructure is being built in collaboration with the state government of Uttar Pradesh and Tamil Nadu. An investment target of 20 thousand crores in the coming 5 years has been set for this.

PM observed that the iDEX initiative which was launched to encourage entrepreneurs particularly those associated with MSME and Start-ups, is also getting positive results. Through this platform, more than 50 start-ups have developed technology and products for military use, he noted.

The Prime Minister said that the goal is to build a capable India to make the Global Economy more resilient, more stable and to bring peace in the world. This is the idea behind Atmanirbharta in Defence Manufacturing. India has the potential to become a reliable supplier of defence equipment to many of its friendly nations. It will strengthen India’s strategic partnerships and strengthen India’s role as a “net security provider” in the Indian Ocean region, the Prime Minister said.

He said feedback and suggestions received on the Defence Production and Export Promotion Policy Draft will help in implementing this policy at the earliest.

PM concluded by saying that collective efforts will help in releasing our resolve to become self- reliant, to become an Atmanirbhar Bharat.