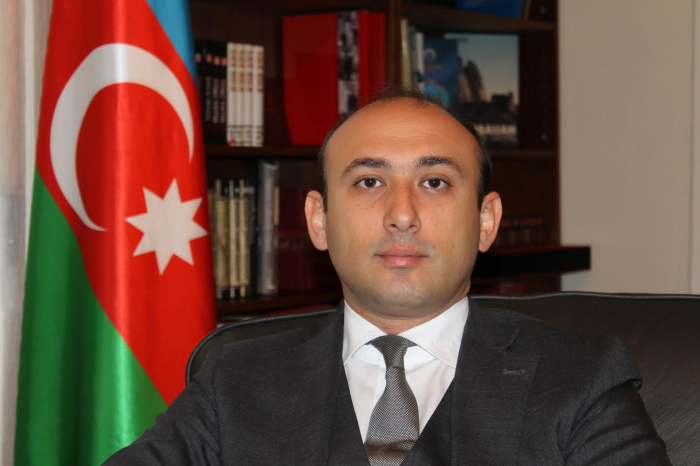 In his article, Ahmadzada talks about Armenia's attempts to distort historical realities, its military aggression against Azerbaijan, as well as military provocations of Armenia that began July 12, grave consequences of the Armenia-Azerbaijan Nagorno-Karabakh conflict and the possible ways of its settlement.

The diplomat stressed that the world has witnessed that after Armenia’s military provocations against Azerbaijan on the Armenian-Azerbaijani state border in the direction of Azerbaijan’s Tovuz district, which began on July 12, the Armenian side, in an attempt to evade responsibility and hide its aggressive actions, decided to resort to various tricks.

“With the help of its extremist groups, Armenia committed acts of violence and vandalism against Azerbaijani diplomatic representatives and members of the Azerbaijani communities abroad, put pressure on the media, politicians and public figures holding an objective position related to the events and carried out a large-scale disinformation campaign against Azerbaijan,” Ahmadzada said.

“The countries and peoples of our region are well aware of the abilities of the Armenian side to falsify historical events, misappropriate history, culture, music, cuisine and traditions of the region in which we are located,” the ambassador wrote.

“The Armenians represent Armenia as the "first Christian state", misappropriating the history of Caucasian Albania, distorting the events of the World War I and, finally, masking their policy of occupation and aggression against Azerbaijan, bringing to the fore the "principle of self-determination" of the so-called "people of Nagorno-Karabakh",” Ahmadzada added.

“All these historical perversions are aimed at attracting sympathy in relations with the world community, especially with the West,” the diplomat said. “It is hard to imagine what Armenians in the world would be talking about today without these historical insinuations.”

“Being a small, poor country, Armenia without the access to sea and natural resources, excluded from all regional economic processes, is incapable of being useful in international cooperation,” Ahmadzada said.

The diplomat cited factual evidence of who is the aggressor in the Nagorno-Karabakh conflict.

1. Armenia occupied 20 percent of the internationally recognized territories of Azerbaijan, including the Nagorno-Karabakh region and seven adjacent districts.

3. Armenia carried out ethnic cleansing against Azerbaijanis both in Armenia and in the occupied Azerbaijani territories. During the conflict, 250,000 Azerbaijanis were expelled from Armenia, 50,000 from the Azerbaijani Nagorno-Karabakh region and 750,000 from the surrounding districts. Amid high population growth in Azerbaijan, today the number of Azerbaijani refugees and internally displaced people is more than 1.2 million people.

4. During the hostilities, the Armenian armed forces committed numerous war crimes against the Azerbaijani civilian population, including the Khojaly genocide.

5. Armenia destroyed Azerbaijani historical and cultural heritage in the occupied territories. It is no coincidence that Aghdam city, one of the seven occupied districts adjacent to the Nagorno-Karabakh region, once the most important economic and cultural center in the region, is now called "Caucasian Hiroshima".

6. Armenia carries out illegal activity in the occupied territories, including illegal resettlement of Armenians from other countries, illegal using of the natural resources in the region, facilitates illegal visits of foreigners to the region, as well as produces drugs on the

7. The documents adopted by numerous international organizations in connection with the conflict, including the UN Security Council’s four resolutions recognizing the Nagorno-Karabakh region as part of the Republic of Azerbaijan and calling for the complete, immediate and unconditional withdrawal of the occupying forces from all occupied Azerbaijani territories and the return of refugees and IDPs to their lands are still ignored by Armenia.

“No matter how the Armenian side tries to hide all these facts by using various groundless arguments, the truth is still the same,” the diplomat said. “Armenia is the aggressor while Azerbaijan is the victim. Only naive or biased may believe the lies of the Armenian side, which is trying to hide its aggression against Azerbaijan pretending to be “poor and long-suffering people”. However, ignoring a crime prompts to commit new crimes.”

Regarding the positions of the parties to the conflict and its fair settlement based on international law, Ahmadzada stressed that Armenia presents the conflict as an ethnic clash between the Armenian minority, that is, the Armenians of the Nagorno-Karabakh region, and Azerbaijan.

“However, the conflict, which began in February 1988 with the aim of separating the Nagorno-Karabakh Autonomous Region from Azerbaijan and uniting with Armenia was based and is still based on the idea of "miatsum" (reunification in the Armenian language), which led to the adoption of the resolution of the Supreme Council of the Soviet Socialist Republic (SSR) of Armenia on "reunification of Armenia SSR and Nagorno-Karabakh" in 1989, which contradicted the Constitution of the USSR,” the diplomat said.

“After the collapse of the USSR, trying to avoid accusations of violating Azerbaijan’s territorial integrity, Armenia started to talk about "self-determination of the people of Nagorno-Karabakh" by occupying the Nagorno-Karabakh region by military means and expelling all Azerbaijanis and establishing a puppet regime in the occupied Azerbaijani territories, the so-called "Nagorno-Karabakh Republic", not recognized by any country, including Armenia,” Ahmadzada added.

“It is obvious that this conflict has nothing to do with self-determination and is based on Armenia's desire to annex the Azerbaijani territories,” the diplomat said.

“There is not such a concept as people of Nagorno-Karabakh. There is an Armenian community in the Nagorno-Karabakh region that currently resides there and the Azerbaijani community that was ethnically cleansed and forcibly expelled by Armenia.”

“The demand by the Armenian side of the right to self-determination of the Armenians of the Nagorno-Karabakh region, who were subsequently resettled to this territory due to the expulsion of Azerbaijanis, the indigenous inhabitants of the region, is senseless and reveals the true nature of Armenia's aggressive policy," the diplomat said.

“This condition, which violates international law, is in fact the recognition by Armenia of its aggression against Azerbaijan,” the diplomat said. “At the same time, by focusing on technical issues such as expanding the powers of the OSCE observation mission, Armenia seeks to perpetuate the status quo and avoid the negotiations aimed at the direct settlement of the conflict.”

Regarding Azerbaijan's position on the settlement of the conflict, Ahmadzada stressed that Azerbaijan is considering the "stage-by-stage" settlement, in which the issue of the final status of the Nagorno-Karabakh region is resolved at the final stage, as the best way out of the current situation.

“First of all, in case of international guarantees, the focus should be on gradual solution of such tasks as the liberation of the occupied Azerbaijani territories, ensuring the security of the population, restoring transport communications and the return of Azerbaijani IDPs to their places of residence, as well as to the Nagorno-Karabakh region, and then, on the basis of experience of the best models of autonomy in the world, including Italy, determination of the final status of the Nagorno-Karabakh region within Azerbaijan’s territorial integrity,” the diplomat said.

“Azerbaijan's position is based on international law, the Helsinki Final Act, numerous documents adopted by international organizations, including the four already mentioned resolutions of the UN Security Council,” Ahmadzada said.

“Armenia must understand that in the 21st century it is unacceptable to change the state borders by using force and that the puppet regime created in the occupied Azerbaijani territories will always remain an illegal formation, the result of aggression and racial discrimination,” the diplomat added.

“Therefore, if Armenia is really interested in the settlement of the conflict through negotiations, it would have to abandon maximalist positions, that is, from the "status of independence" or "preservation of the status quo", and accept the option of gradual settlement,” the diplomat said.

“Only if Armenia agrees with the option of gradual settlement, starting with the withdrawal of its troops from the occupied Azerbaijani territories, we will see that it is ready for peace,” Ahmadzada said.

The diplomat stressed that the events of April 2016 and the events of July 2020 showed that the current status quo is not a solution to the problem and poses a big threat to the security of the entire region.

“Azerbaijan is the guarantor of security and peace in the South Caucasus, Azerbaijan's multi-billion dollar energy transport and infrastructure projects have contributed to the development, cooperation, prosperity and stability to the region,” the diplomat said. “Azerbaijan is not interested in a new war, but will never reconcile with the occupation of its territories and will do everything to restore its territorial integrity, which is absolutely legal.”

"The actions of the Armenia's current authorities until today have shown that they have not learned lessons from the past and continue the policy of their predecessors, which led to the isolation of this country from regional processes and its socio-economic difficulties,” Ahmadzada said.

“The Armenian people must understand that regardless of who is in power in Armenia, this country has only two choices, namely, lasting peace, integration into regional processes, development and hopeful future, first of all, by withdrawing the Armenian armed forces from the occupied Azerbaijani territories or constant tension, isolation, poverty, depopulation with the preservation of the status quo,” Ahmadzada added.

“In any case, the conflict can be resolved by restoring Azerbaijan’s territorial integrity and there is no other solution," the diplomat said.

The article is available through the following links: