Melania Trump uses private channels while in the White House 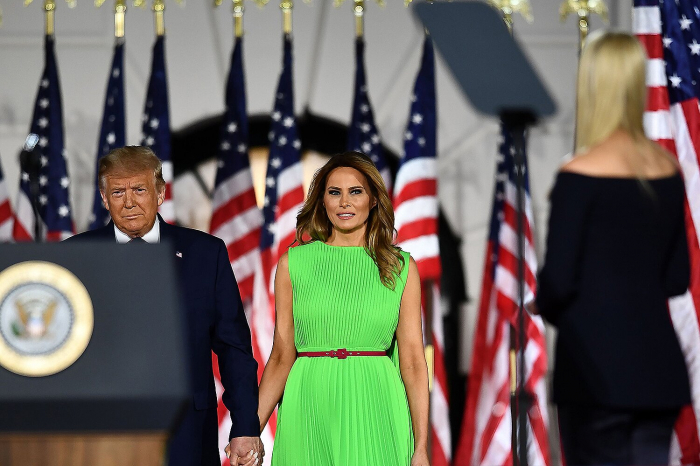 Former senior adviser claims she corresponded multiple times a day with the first lady on state business via private channels.

Melania Trump used private email and messaging while in the White House, according to a former senior adviser and estranged friend.

Stephanie Winston Wolkoff, speaking to the Washington Post, claims she corresponded multiple times a day with the first lady via private channels.

According to the Post, the messages discussed official business including “government hires and contracts (including Winston Wolkoff’s), detailed schedules for the president and first lady during the Israeli and Japanese state visits, strategic partnerships for the first lady’s Be Best initiative, the logistics of the Easter egg roll, and finances for the presidential inauguration”.

In the interview, which follows the recent publication of her memoir, Melania and Me: The Rise and Fall of My Friendship with the First Lady, Winston Wolkoff said “Melania and I both didn’t use White House emails”. Melania Trump used a private Trump Organization email account, email from a MelaniaTrump.com domain, iMessage and Signal to communicate even after she became the first lady, Winston Wolkoff told The Post.

The claims, if true, would make Melania Trump the latest member of the Trump administration and family to face scrutiny over the use of private email, despite Donald Trump’s insistence that his 2016 rival Hillary Clinton should be prosecuted over her use of a private email server. The president’s emphasis during his campaign on the FBI investigation into Clinton’s emails gave rise to the chat “Lock her up”, which became a common refrain at Trump events.

The first lady’s office did not immediately respond to a request for comment from the Guardian, nor did Winston Wolkoff’s publisher Simon & Schuster.

Winston Wolkoff helped oversee Trump’s inauguration address and was appointed as an unpaid adviser to Melania Trump after the 2016 elections. She was forced out of the White House following reports that she and her firm were paid $26m to help plan the inauguration ceremony and other events in 2017.

In her memoir, Winston Wolkoff corroborates claims that Melania Trump has a strained relationship with Ivanka Trump and provides other insights into the first lady’s calm reaction to revelations that her husband said he liked to “grab” women “by the pussy”.

In an interview on MSNBC’s The Rachel Maddow Show on Tuesday, Wolkoff also defended her decision to make recordings of her conversations with the first lady, saying she needed evidence to protect herself amid questions about the costs of Trump’s inauguration.

“I’ve been accused of taping my friend, as the White House said, and how horrible of a human being I am for doing that.”

“And they’re right. If she was my friend, it would be horrible. But Melania and the White House had accused me of criminal activity and publicly shamed and fired me and made me their scapegoat,” Wolkoff said. “At that moment in time, that’s when I pressed record. She was no longer my friend and she was willing to let them take me down.”

Stephanie Grisham, the White House chief of staff and spokesperson for Melania Trump, said Winston Wolkoff was out for revenge.

“Anybody who secretly tapes their self-described best friend is, by definition, dishonest,” Grisham said.

“The book is not only full of mistruths and paranoia, it is based on some imagined need for revenge.”