Pakistan Observer: First Lady of Azerbaijan Mehriban Aliyeva one of those who can influence society and change it for better 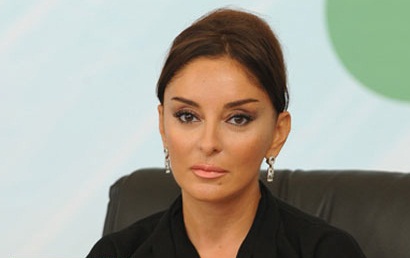 By Farhat Noor,
Executive Director at Institute of Peace and Diplomacy of Pakistan for Pakistan Observer

Throughout times and history there have been women in the world who didn`t take things quietly, who took action to make their world a better place, and who took initiative to make a way for others. From politics to humanitarianism to culture, these women plays a pivotal role in the world in which we live.

The Azerbaijani Lady, President of Heydar Aliyev Foundation, Goodwill Ambassador of UNESCO and ISESCO, member of Parliament, Mrs. Mehriban Aliyeva is one of those who can influence society and change it to better, who is capable to capture the hearts and minds of people. A qualified physician, Mehriban Aliyeva is actively engaged in different spheres of life. Starting from 1995, she enlightened the world about her country`s cultural wealth by means of festivals, exhibitions, cultural events and concerts through her charitable foundation "Friends of Azerbaijan Culture".

In 2004, Mehriban Aliyeva, the spouse of the Azerbaijani President Ilham Aliyev, became the President of Heydar Aliyev Foundation, which was named in commemoration of the National Leader of Azerbaijanis. The main goal of foundation is the country`s social, economic and cultural development.

One of the main objectives of Mehriban Aliyeva`s activities is to address the problems of children. Construction of new schools, hospitals, clinics, musical lyceums, Thalassemia Centre with free of cost treatment, launching the projects of insulin and blood donation, campaign on breastfeeding, summer camp for integration of disabled children into society are the part of the charitable work in this domain.

Mehriban Aliyeva also gives regular moral and material assistance to the homes for the elderly, getting them the necessary medical supplies.

Culture is one of the priority spheres of Heydar Aliyev Foundation. Mrs. Aliyeva initiated "Days of Azerbaijani Mugham" (Mugham-traditional classical music of Azerbaijan) in Niagara and later established Mugham Centre in Baku. She also sponsored performances of Antonio Vivaldi, George Gershwin music and publication of number of books on culture, music, history of Azerbaijan.

The annual Gabala Music Festival initiated by Mehriban Aliyeva has become one of the major events in World`s musical life and is attended by prominent musicians from all around the globe.

The First Lady of Azerbaijan has been the initiator and organizer of many international conferences on dialogue between the different faiths, striving for understanding and peaceful coexistence. Azerbaijan, where all religions live in harmony, is a striking example of the tolerant relationship between the representatives of different faiths.

A number of mosques and shrines of Azerbaijan, St. Mary`s Catholic Church, the orthodox church were reconstructed by the foundation as a part of the "Azerbaijan - Home to Tolerance" project of the organization.

Mehriban Aliyeva is enormously active in preservation of the world heritage as well. Reconstruction of five window lattices at the 14th century-Strasbourg Cathedral, establishment of the Islamic Arts Department at Louvre Museum, renovations at Palace of Versailles in France sponsored by Mehriban Aliyeva is a vivid manifestation of this activity. She also contributed to the renovation of monuments of Culture in Haiti and donated to the French Association of Terror Victims.

The foundation pays significant attention to the development of sports. As President of the Azerbaijan Gymnastics Federation, Mehriban Aliyeva showed herself as a skilful organizer. Due to her growing prestige in international arena the World Cup competitions 2003 and 2004 and the World Championship 2005 on Rhythmic Gymnastics were hosted by Azerbaijan. The winners of Olympic and Para-Olympic Games, international championships are paid monthly stipends and scholarships or otherwise financially benefitted.

Due to Mehriban Aliyeva`s hard efforts for protection and development of Azerbaijan`s verbal folk literature and music heritage, she was awarded the title of Goodwill Ambassador of UNESCO on August 13, 2004. The title of Goodwill Ambassador of ISESCO was given on November 24, 2006, for the wide-scale and selfless activity in different spheres of life.

The association of Heydar Aliyev Foundation with Pakistan started soon after the earthquake of 2005, when Mehriban Aliyeva had taken an initiative to construct a new modern school for girls in place of destroyed one in Muzaffarabad. The 500-pupil capacity school, located in a mountainous area, was built by 2007.

The foundation regularly supplies the school with all necessary means as well as pays monthly stipends to 5 deserving students of the school. It is notable that after the complete reconstruction and renovation in 2012, the school was named after the First Lady of Azerbaijan.

In 2012 and 2013, the First Lady of Azerbaijan initiated a series of healthcare, education and humanitarian projects in all provinces of Pakistan. Within the plan of action, the hepatitis B vaccination, check up and treatment were carried out in collaboration with Saif Foundation at Edhi Home, Akbar Care Institute for Cerebral Palsy in Peshewar and Women`s and Children Hospital in Lakki Marwat. In 2013 another donation was made to Saif Foundation which was used by latter in healthcare sector.

The foundation also took part in celebrations of the World Blood Donor Day in Peshawar. Mehriban Aliyeva donated one fully equipped ambulance and thousands of blood collection bags to Hamza Foundation, which deals with safe blood transfusion to the beneficiaries on both sides of Durand Line on purely voluntary basis.

In course of its activity in Khyber Pakhtunkhwa, Mrs. Aliyeva also made a financial assistance for the construction of a new block of Eye Hospital of Khyber Eye Foundation, Peshawar.

During the holy month of Ramazan in 2012 and 2013, the foundation hosted iftar dinners to beneficiaries of Pakistan Sweet Home (Pakistan Baitulmal) in Islamabad, Rawalpindi, Karachi, Larkana, Nawabshah, Quetta, Zhob and Peshawar and Edhi Homes beneficaries in Islamabad. The Foundation also carried out action on Eid ul Adha, distributing meat of hundreds of animals to the people of Lakki Marwat.

Indeed, activity of Azerbaijan`s First Lady Mrs. Mehriban Aliyeva in Pakistan serves to further strengthen and deepen brotherly relations between Pakistani and Azerbaijani Nations. It is remarkable that due to her activity in Pakistan Mrs. Mehriban Aliyeva was rewarded the title of "Symbol of Humanity. Woman of 2012" by "Women Volunteers Organization" and the Daily Times newspaper.

Mrs. Aliyeva received many other prizes and awards from many other prestigious international entities for her special services to the global culture, in establishing a permanent cultural and political dialogue between the civilizations of East and West. The "Ruby Cross" Order of "Philanthropists of the Century" International Charity Foundation of Russia, prize of World Health Organization, Golden Heart International Award,Grand Commander`s Cross of the Order of Merit of the Polish Republic, the French Legion of Honor by the order of the President of France, UNESCO`s Mozart Gold Medal, Canadian "World Golden Rose Award " and others.