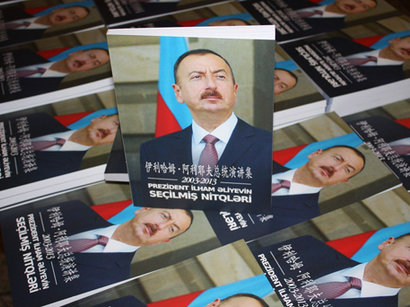 The book of "The Selected Speeches of Azerbaijani President Ilham Aliyev in 2003-2012" in Chinese was presented in Beijing by the Centre for Strategic Studies (CSS) under the President of the Republic of Azerbaijan.

The delegation of the CSS under the President of Azerbaijan visited Beijing on August 26, the press service of the CSS told Trend on Tuesday.

According to the report, CSS director Farhad Mammadov made a speech on `The role of Azerbaijan in Caucasus region` before the Chinese experts at the Institute of Russian, Eastern European and Central Asian Studies of the Academy of Social Sciences (CASS) of the People`s Republic of China.

Then the leading research worker of the CSS Rashad Kerimov presented his book `The Selected Speeches of Azerbaijani President Ilham Aliyev in 2003-2012`.

The event was held in Beijing world culture center with the organizational support of the CSS and Azerbaijan`s Embassy in China.

The official representatives of China, scientists, businessmen, heads of authoritative Chinese media outlets, extraordinary and plenipotentiary ambassadors of Russia and Kyrgyzstan to China, diplomats from Turkey, Venezuela, Moldova and Ukraine were among more than hundred participants of the event.

The event was opened by the Ambassador Extraordinary and Plenipotentiary of Azerbaijan to China Latif Gandilov. He noted that, the presented book will help to closely learn Azerbaijan.

The Vice-President of the Chinese Academy of Modern International Relations, and the Professor of Ethnic University, as well as the CSS director made speeches during the event.

The book is dedicated to Ilham Aliyev`s successful activity as the President of Azerbaijan in 2003-2013, the successes achieved by Azerbaijan in different spheres, country`s integration into world community and the problems that were faced by Azerbaijan, the CSS director noted.

According to him the book will help to strengthen relations between Azerbaijan and China, as well as help the peoples of the two countries to get to know each other better.
A banquet was given by the end of the conference in honour of the guests.