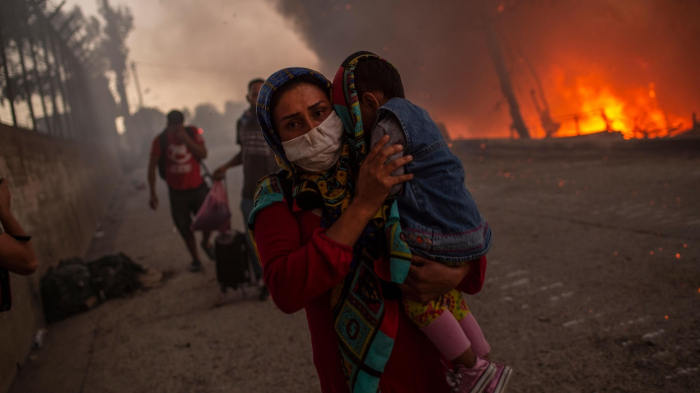 Germany says 10 European countries have agreed to take 400 unaccompanied minors who fled Greece's largest migrant camp when it was gutted by fire.

In a press conference on Friday, Interior Minister Horst Seehofer said most would go to Germany and France.

Close to 13,000 people had been living in squalor in the Moria camp on Lesbos.

Families have been sleeping in fields and on roads after fleeing the blaze on Wednesday, as authorities struggle to find them accommodation.

Near the ruins of Moria local residents blocked roads to stop charities from delivering aid and said they were against the construction of new tents.

After visiting Moria, European Commission Vice-President Margaritis Schinas announced that the devastated camp would be replaced by a modern facility on the same site.

The Greek government has sent a team to Lesbos to find a solution locally, but residents oppose plans for a new camp.

"Now is the time to shut down Moria for good," Vangelis Violatzis, a local municipal leader, told AFP.

How to deal with the mass arrivals of migrants, mainly to Italy and Greece, has divided the EU for years.

Italy and Greece have accused wealthier northern countries of failing to do more, while a number of central and eastern nations are openly resistant to the idea of taking in a quota of migrants.