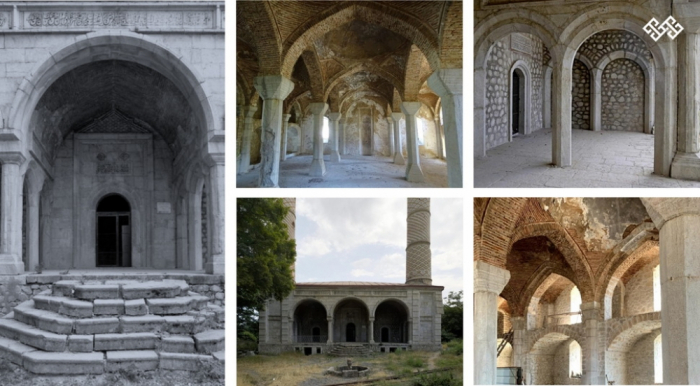 Armenia is willing to falsify the history by making serious changes as “restoration” in the interior of the “Yukhari Govhar agha” (The Upper Govhar Agha Mosque) mosque situated in Shusha, a famous cultural city of Azerbaijan occupied by Armenia, Azerbaijan’s Ministry of Culture told AzVision.az.

“The “Yukhari Govhar agha” mosque was constructed by Karbalayi Safikhan Sultanhuseyn oglu Garabaghi by the instruction of Govhar agha, daughter of Ibrahimkhalil khan, in 1883-1884. A mosque had been built with cane and thatch in the place of today’s mosque during the power of Panahali khan.

The mosque constructed by Panahali khan was replaced with stone by Ibrahimkhalil khan in 1768. Later, in its place the mosque called “Yukhari Govhar agha” was constructed that existed up until today.

The Republic of Armenia is willing to falsify the history by making serious changes in the interior of the mosque as “restoration”.

Dissemination of photos of the mosque on various internet sources proves it clearly. The mosque is waiting for the permanent residents of Karabakh,” the ministry added.